Where the buffalo roam 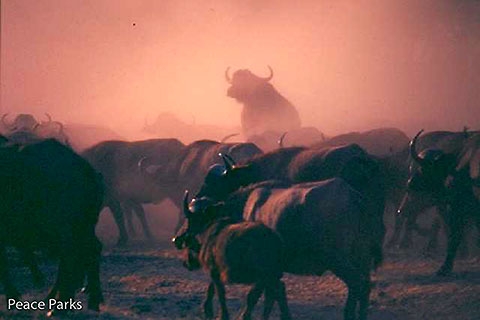 A new breeding herd is being welcomed into the province, writes CRAIG BISHOP.

THIRTEEN juvenile buffaloes are waiting in bomas for their chance to form part of a new breeding herd for the Greater St Lucia Wetlands Park.

The calves are the offspring of 54 buffaloes that were taken to the Northern Cape`s Graspan Nature Reserve from the Hluhluwe-iMfolozi Park seven years ago as a founder population for one of SanParks` first disease-free buffalo breeding projects. Disease-free should be understood to mean free of all diseases except the indigenous, tick-borne corridor disease to which buffalo are immune.

This was a highly successful project and 37 disease-free calves were returned to swell the existing herd in Ithala game reserve.

The project has now ended and SanParks has offered to return the remainder of the founder population as well as a number of offspring. A total of 34 of the 54 buffalo have been released onto the Ndlozi peninsula section of the Wetlands Park. An additional 13, which were bred in captivity, are awaiting veterinary clearance in bomas in the Hluhluwe-iMfolozi Park for later release into the park.

Wetlands Park chairperson Mavuso Msimang said it was fitting that they will end their days in the region where they were born, having contributed to the worthy breeding project, which yielded 58 disease-free calves.

The Greater St Lucia Wetlands Park was recently singled out for praise by national Environmental Affairs and Tourism Minister Marthinus van Schalkwyk for its combination of tourism development, conservation, poverty relief, community participation and empowerment. `The next phase will see us expanding our partnership with Mozambique and Swaziland, whose ministers I will be meeting before the end of November. If our plans succeed we will be creating the first Transfrontier Marine Park and the first Transfrontier World Heritage Site in Africa between South Africa and Mozambique as part of the Lubombo Spatial Development Initiative.

`Thus far it has created 4500 temporary jobs and will be creating 2 400 more with 900 permanent jobs over the next 36 months. We have also recently awarded eight concessions for eco-friendly private sector developments, which average over 75 percent Black Economic Empowerment, and 20 percent of which involve the local communities. This first phase of R450 million tourism investment in eight sites will bring about R300 million annually into the local economy, with a further Rl,5 billion investment and another 1 500 permanent jobs targeted for 2007.

By Craig Bishop, The Witness

Almost lost for words in, yes, a living tapestry