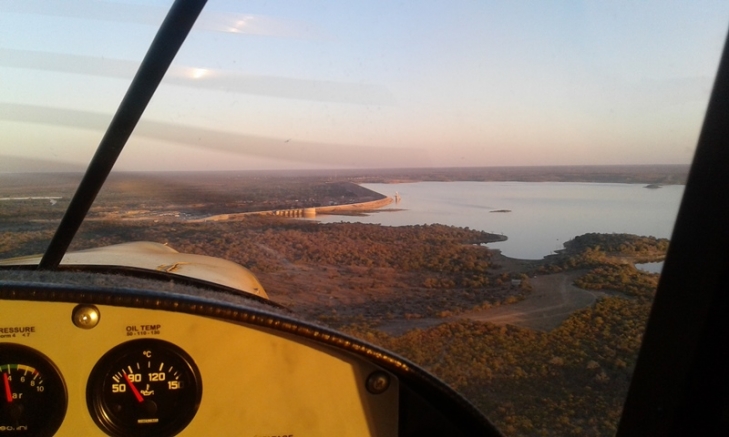 An aerial view of the magnificent Massingir Dam. © Douglas Selyer

Limpopo National Park is now using its new aeroplane, a Savannah S, as replacement of its Bantam, which served the park from 2005 until 2015. The Savannah was donated by the Rhino Protection Programme – a partnership between the South African Department of Environmental Affairs, South African National Parks, Peace Parks Foundation and Ezemvelo KZN Wildlife. The multi-faceted programme is funded by the Dutch and Swedish postcode lotteries and a number of other donors.

The Bantam was replaced after ten years of service, because of the need for a faster aeroplane which could cover a larger area in the same time. The new Savannah has a higher level of functionality, with numerous extra features, such as long-range fuel tanks for extended operations and wind deflectors that allow for the doors to be removed for aerial filming. Another important feature is speed: the Bantam could attain a top speed of 50 knots, while the Savannah is capable of reaching 80 knots.

The Savannah will continue to perform the functions of the Bantam, such as for infrastructure planning, mainly for roads and campsites, and to prevent human-wildlife conflict. Other functions include wildlife monitoring and anti-poaching patrols. An aeroplane is vital for the operations of the park, particularly to combat wildlife crime.

In other news, the governor of Gaza Province recently attended a function in the park and handed over five water pumps and associated accessories to two resettled communities. She also presented the cheque representing 20% of the park’s revenue for 2015 to local communities. At the same ceremony, the anti-poaching patrol boat that will be used to patrol the Massingir Dam was launched. It will help prevent illegal fishing and, more importantly, prevent poachers from using the dam to access Kruger and Limpopo national parks. The boat was procured thanks to the World Bank’s Mozambique Conservation Areas for Biodiversity and Development Project (Mozbio).

Livelihoods Strategy For Great Limpopo On The Map