Maputaland the way it was 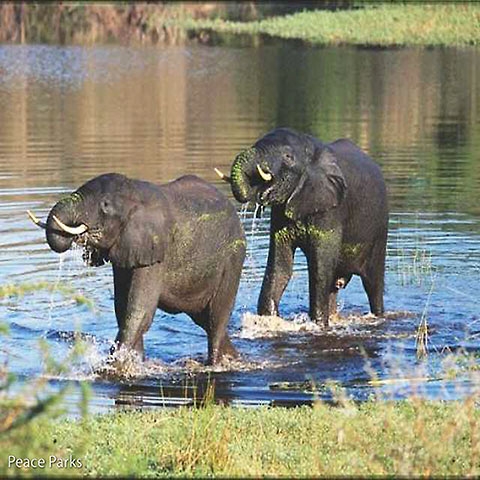 FROM the shade of the stilted thatched hide you look out across a large waterhole as a banded mongoose scampers across the grass. A nyala ram comes out with his females and hornless young.

Then, with slow, graceful gait they appear through the tall trees. Just below the hide are pools of mud where they bathe and interact. I can hardly get one into the frame of my camera. No zoom lenses needed for this encounter.

These are the Tembe elephants, which some scientists believe are genetically different from others in South Africa. They were the last naturally-occurring population in KwaZulu-Natal as all others have been introduced.

DIFFERENT FROM THE OTHERS

In 1983 the Tembe Tribal Authority, which owns the land, agreed to set aside 30 000 ha tucked up against the Mozambique border for conservation. This became the Tembe Elephant Park, but the elephants still roamed freely between KZN and Mozambique with only three sides of the reserve being fenced to protect neighbouring communities.

But in 1989 about 24% of adult bulls had visible wounds from poaching in Mozambique. So a 19km fence was erected along the international boundary, truncating the ancient movement route, but conservationists believed there was no alternative.

It is one of the last wild places where you can get a taste of the tropical coastal environment as it once was throughout Maputaland.

Many of the elephants still bear wounds. One has a hole in his trunk from a poacher`s snare but has survived, water gushing out of the hole as he manages to drink enough to sustain himself. Another has a limp.

These are the so-called “walking wounded” and when they were first confined to Tembe they were angry and disturbed. “Elephants with grudges”, as one conservator put it.

Most of the dusty tracks were ancient elephant paths, and tourist vehicles have sometimes had to back up for a couple of kilometres to get out of the way as a large herd ambles towards them. The joke then was that a vehicle needed one forward and five reverse gears.

The reserve was not opened to the public for some years to allow the elephants time to settle down. Now, more than 20 years later, this is the best elephant viewing I have ever seen.

Scientists believe the population is biased towards bulls, but following a public outcry after four old bulls were professionally hunted in 1999, research continues, with no intervention. There are now close to 200 animals and resident ecologist Wayne Matthews says the unique sand forest – one of the reasons the reserve was proclaimed – is showing substantial impact which could be threatening other species.

Southern Mozambique and the northern part of KZN have been recognised as an International Centre of Plant Diversity, the Maputaland Centre, with high levels of endemism and biodiversity.

Plants, birds, clouds of butterflies and mounds of dung beetles – the variety is incredible.

Sand forest forms the core of the reserve: a rare and unique habitat, now restricted to the ancient coastal dunes of KZN and the extreme southern part of Mozambique. It was in these dry, leached soils that the elephants first sought refuge, hardly ever being seen.

Tourism has always been minimal, with only five 4×4 tourist vehicles a day allowed access to the southern part. The northern part, tucked up against the border, is inaccessible and left to the wilderness.

In 1989 a Durban businessman took over the old camp run by the former KZN Department of Nature Conservation and transformed it into a luxury tented lodge built on stilts to minimise disturbance to the forest. This is electrified but at night you can hear elephants feeding close by.

It is entirely run by the local community, while the Tembe people have a half-share. Many of them can remember their childhood there; one of them was bicycling home from school when he was surprised by a large bull elephant but managed to escape into the bush.

LEFT TO THE WILDERNESS

The eight safari tents, taking a maximum of 16 people, are spread out through the forest. You are quite alone, sitting on your wooden deck.

Under a huge pod mahogany is a braai area, a small ice-cold pool under thatch – very welcome in the sumnmer heat – and a sitting area and bar. Meals are taken in a nearby tent, lit by hurricane lamps.

Tea and coffee is brought to your tent at dawn and the first game drive sets off at Sam after a continental breakfast. The guides have a fountain of indigenous knowledge, pointing out plants and trees used for healing headaches and wounds. Because of the limited number of vehicles, you rarely see anyone else.

Back to the camp for a hearty breakfast and then it is a quiet time for reading, bird watching and relaxing. Or a visit to the hide where you can spend as long as you like. A webcam at the hide is transmitted to the camp to alert you to the arrival of elephants and it`s a short drive to get there.

After tea it is time for the evening drive, perhaps to see hippos in reed-fringed pans in the Muzi swamps whose crystal-clear water flows into the Futi river and on to Delagoa Bay. Then it`s back for a country meal like a smoked fish starter, venison and chicken, followed by a cheesecake or apple crumble. And a nightcap by the fire under the starry sky before taking a torch for the short walk through the forest to bed.

This is a Big Five reserve though leopard are rarely seen.

A couple of years ago four lions were introduced from Pilanesberg and Madikwe and there are now 12. The rare Livingstone`s suni antelope, red duiker, side-striped jackal and four-toed elephant shrew are among the smaller creatures. Then there are more than 100 species of dung beetles which have right of way on all tracks, as a notice at the entrance underlines.

The reserve is accessible by tarred roads and your vehicle can be safely parked inside as you are taken in a 4×4 to the camp. Other places to visit are Kosi Bay, Border Cave with its ancient archaeological history and the smaller Ndumu game reserve, famed for birding.

There are plans to drop fences between Tembe and Mozambique to create a transfrontier park and to possibly link Tembe with the Ndumu through the Mbangweni corridor. The community has agreed to add some of its land on the eastern side to increase the size of the reserve.

To the south, a large area of community land is currently being fenced for a conservation initiative. More land to protect the sand forest, the rare and shy suni and the elephants.

• Daily rates at the Tembe Elephant Park range from R645 pp (for a four-night stay) to R895ppfor one night, inclusive of meals and game drives. To Book phone: 031-267-0144 or e-mail: info@tembe.co.za. Visit www.tembe.co.za and the webcam at the hide: www.elecam.org.

Lesotho is part of world's heritage