Lesotho is part of world’s heritage 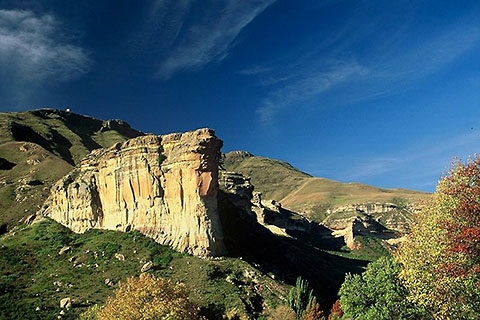 FROM the day Moshoeshoe left Butha Buthe for Thaba Bosiu to the day he died, Lesotho’s history was written. Monuments and heritages were left. But over the years they were left unprotected.

But the Maloti-Drakensburg Transfrontier Project (MDTP) felt it was time to protect heritage places in its operational districts. The sites to be protected are those found in Mokhotlong, Butha Buthe, Qacha’s Nek and Leribe districts, which are major project strongholds.

It is in fact believed that heritage in one country must be part of the world’s heritage. Heritage gives a national image and through heritage a country’s identity is observed.

Opening a training workshop on Cultural Heritage run by the University of Witswatersrand in collaboration with the National University of Lesotho (NUL) at T’sehlanyane, Leribe, the principal secretary in the ministry of tourism, Teboho Metsing, explained that heritage is the history, traditions as well as the qualities that a country or a society has had for many years and that “are considered an important part of each country”.

Mr Metsing acknowledged: “We are the society whose character has been molded over a considerable period of time by an environment which consists of diverse landscapes, a rich natural resource base and complex interactions with other societies.”

He added: “As a country we have recognised the need to engage in self-conservation and preservation, locally through various policy documents and strategic plans and internationally through ratification of conventions.”

He warned trainees to share their knowledge with their colleagues when returning to their respective districts.

The director of the National Environmental Secretariat, Motsamai Damane, observed during an opening session that environmental protection was a responsibility of every ministry. He noted that as a department they were mandated to implement the policies of Agenda 21 – to preserve the environment for future generations.

On the same occasion, director of culture NtSema Khitsane explained to the trainees that her department consisted of the national library, which has the Lesotho collection written by Basotho and the heritage collection on Basotho and Lesotho.

“We also have the national archives where retired records on Lesotho are kept and, lastly, the national museum where archeological remains are held.” This is despite the fact that many of Lesotho’s historic documents are lying in a dilapidated building in Maseru West, as Public Eye highlighted in an investigation carried out last month.

The national library was demolished while a new one is under construction. There is currently no national archives worthy of the name.

The trainees, drawn from the public sector and communities, are undergoing training in cultural heritage and the importance of me past, particularly stone age archaeology, rock art, farming communities and historical archaeology and paleontology.

They will also leam how to conduct archaeological surveys and historical and living heritage surveys. The workshop, which started last Monday, ends on February 25.

Maputaland the way it was