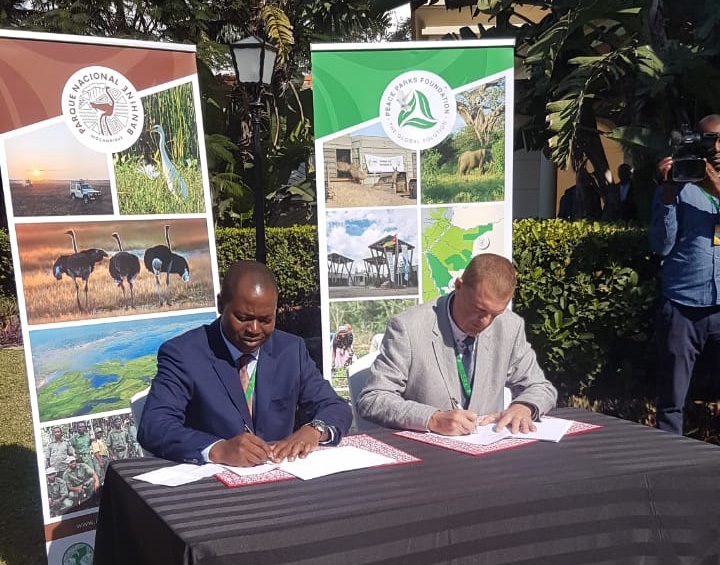 On the heels of a second partnership agreement signed between Peace Parks Foundation and Mozambique’s National Administration for Conservation Areas (ANAC) to further develop Maputo Special Reserve and Ponta do Ouro Marine Reserve (Zinave National Park was the first agreement signed in 2015), the two organisations formalised another long-standing alliance in developing Banhine National Park with the signing of a third partnership agreement. This park is a critically important component of the Great Limpopo Transfrontier Conservation Area as it lies within the wildlife corridor between the Zinave and Limpopo National Parks.

“Last year two hippos moved from the Limpopo National Park to Banhine’s central pan system and recently, an elephant bull, that was collared in Limpopo National Park last year, walked to Banhine through a section along the Limpopo river that has been kept clear of human development, giving scientific evidence of the functionality of corridor linkages between the National Parks,” says Antony Alexander, Peace Parks Foundation Senior Project Manager closely involved in the development of the Great Limpopo Transfrontier Conservation Area.

As remote as it is wild, with the nearest town being over a hundred kilometres away by dirt track roads, Banhine National Park features extensive plains and flood areas, which form crystal clear lagoons during the rainy season. Werner Myburgh, Chief Executive Officer of Peace Parks Foundation says, “When I first flew over a large wetland in the middle of the park in 2015 it took me a moment to realise that the animals were, in fact, standing waist-deep in water that was so clear it was nearly invisible. It was a truly remarkable experience seeing such a large area virtually untouched by mankind.” Because of this, Banhine is home to a great diversity of both land and water birds during the rainy season and is an important passage point for migratory birds. Thousands of birds from all over the African continent can be seen here.

Although proclaimed a national park in 1973, the biodiversity of the area suffered under a long period of drought, illegal hunting, and the illegal ivory and meat trades which had nearly eradicated all wildlife. In order to rehabilitate and restore the park, it is a priority for both ANAC and Peace Parks Foundation to secure the area in preparation for the reintroduction of wildlife. To this end, Peace Park Foundation’s Ernst Beylefeld was appointed a Banhine Law Enforcement Operations Manager in 2017 to spearhead a $1.3 million anti-poaching project over three years alongside the Park Warden. Co-operation with local leaders and ‘turning’ arrested poachers into allies has led to numerous successes. He says, “Since I started in October we have arrested 16 poachers and confiscated all of their firearms, some of which were home-made rifles. We also located and removed 535 snares and gin traps and arrested 36 suspects responsible for installing these devices in the field.” Because snares can easily be manufactured and set in their thousands, they are a serious threat to wildlife and rangers are well-trained to look out for them. Since late last year an additional ten new rangers joined the team after completing a grueling ranger training course presented by the Southern African Wildlife College and funded by Peace Parks Foundation.

As the park becomes more secure, animal translocations are planned for Banhine. Reintroducing wildlife is a primary focus in Peace Parks’ strategy for developing transfrontier conservation areas in the region as repopulated parks will stimulate the country’s eco-tourism potential.

Whilst securing and developing the protected areas, Peace Parks Foundation is also utilising funding to put in place socio-economic development and alternative livelihoods programmes for the communities living in and adjacent to these parks, who rely on the land and the environment for their daily subsistence. “We are currently in the feasibility study phase for Banhine to fully understand its development potential, which will guide us on how to protect and secure the future of this park. Over the longer term, you need to develop an income for the park for it to become self-sustainable,” says Werner.

Through this partnership agreement, the relationship between ANAC and Peace Parks Foundation is strengthened enabling both parties to more effectively restore the park to its former splendour.