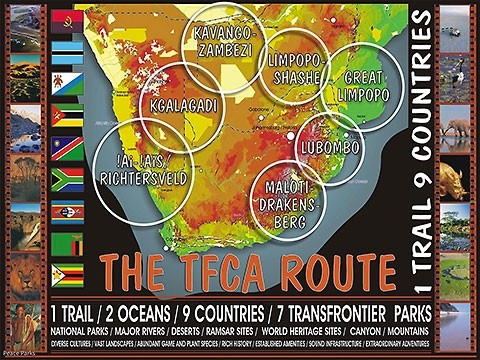 New life is being breathed into the imaginative initiative that aims to see parts of southern Africa turned into large networks of parklands spanning national boundaries.

The driving force is the 2010 Soccer World Cup. The South African government sees the transfrontier parks as the ideal way of sharing tourism and marketing benefits with the rest of the southern African region, and with the event fast approaching, there is now a new urgency about their development.

A statement issued afterwards by Marthinus van Schalkwyk gave the assurance that the development of infrastructure as well as investment in the transboundary conservation areas were gaining momentum.

It said the meeting discussed progress with the implementation of the Transfrontier Conservation Area (TFCA) development strategy for 2010 and beyond.

But noting that the countries already in 2005 endorsed the strategy to turn the transfrontier parklands into southern Africa’s premier tourism destination, the statement reflected a measure of impatience with the SADC’s slow development of the “univisa” which was supposed to be implemented this year to make it easier for tourists to travel between the various countries for purposes of the transfrontier parks as well as the World Cup.

The establishment and joint management of transfrontier conservation areas still have to be worked out between the countries involved. But the intention clearly is to give it impetus by adopting it as a regional initiative.

To speed up the process of joining up parks, to assist with the marketing of the concept, and to encourage investment, the ministerial committee last year set up a special development unit. The strategy will now be taken further by the launch in Durban on May 10 of a strategic brand for TFCAs to form the basis for awareness and advocacy campaigns, and for marketing.

This will be followed by a TFCA investment conference in the Sandton Convention Centre on October 20-21 to market investment opportunities in projects. The idea is to develop an investment catalogue that will tell investors why (hey should invest in the transfrontier conservation projects and how to do it.

It will offer investment opportunities and list incentives and contact information. Van Schalkwyk’s statement said he and his counterparts also agreed on the need to prioritise conservation issues such as wildlife exchange programmes and translocation and transboundary research programmes.

Game translocations are regarded as particularly important as a way of restocking reserves in areas that had been left denuded of game by protracted cross-border and civil wars.

The ministers agreed on the need for their countries to work together to promote ecotourism and to conserve natural resources. They intend meeting soon again to discuss progress in addressing these matters.

The strategy to use the transfrontier parks as a way of sharing the tourism benefits of the world cup was initiated in 2004 by the Peace Parks Foundation, which was set up by industrialist Anton Rupert in 1997 and which has been playing a major role in promoting and facilitating the establishment of such parks in southern Africa.

The new sense of urgency on the part of the governments will come as a relief to conservationists who see the transfrontier parks as the only real hope of saving threatened tracts of the African wilderness for conservation and giving increasingly constricted wildlife more roaming space.

The oldest of the operating transfrontier parks is the Kgalagadi which in 2000 saw the joining together of South Africa’s Kalahari Gemsbok National Park and Botswana’s Gemsbok National Park to form a 38 000km² desert wonderland which has been drawing visitors from many parts of the world.

The second was the Great Limpopo Transfrontier Park which in 2002 saw Kruger National Park joined with Mozambique’s Limpopo Park and the prospective link-up with Zimbabwe’s Gonrezhou to form a 35 000km² reserve.

The third is the Ai-Ais/Richtersveld Transfrontier Park between South Africa and Namibia which, formed in 2003, represented a vital step in creating a contiguous parkland stretching for about 2 000km from South Africa across the Orange River and along the Namibian coast across the Kunene River to Angola’s lona Park.

Long walk to freedom as elephants trek to Angola