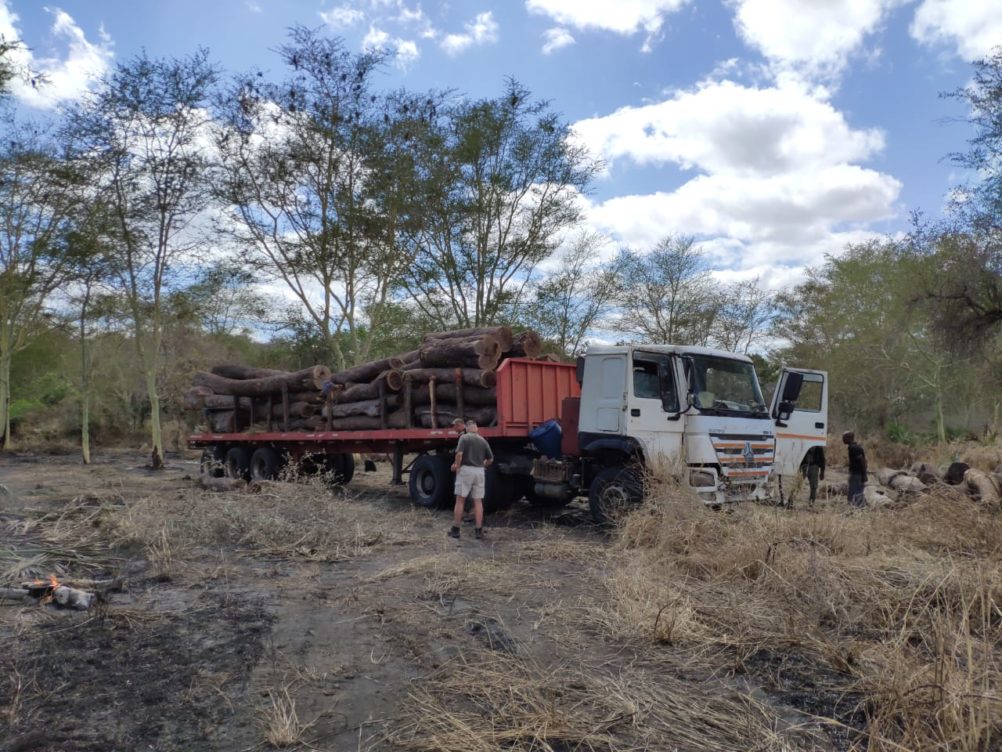 In October 2019 a successful security operation led to the arrest of several suspects involved in a large illegal logging operation in Mozambique’s Coutada 4, a hunting concession that lies on the northern border of Zinave National Park.

After hearing what sounded like chainsaw operations in an area where logging is strictly prohibited and having suspicions confirmed by aerial reconnaissance information, Zinave’s security team contacted Mozambique’s National Administration for Conservation Areas (ANAC) to secure Ministerial approval for an intervention. A large joint anti-logging operation was subsequently set in motion. The operation was coordinated by the Directorate of Protection and Law Enforcement of ANAC in partnership with Peace Parks Foundation, and several other agencies and partner organisations working with the Mozambique Government.

Using a newly installed digital radio system for communication, the operation was coordinated at ground level from Zinave’s Operations Room and had aerial support by helicopter for operations monitoring and the quick deployment of security teams, that included Zinave’s well-trained rangers. Security teams, led by the Mozambique Environmental Quality Agency (AQUA), were also strategically deployed along possible exit routes suspects may use to escape – which proved very effective as several arrests were indeed later made at these locations.

During the operation, a number of suspects were arrested and, so far, seven have been charged with the illegal extraction of wood from a protected area. Further to this, four large logging trucks, five tractors, six motor vehicles, two front end loaders and various logging equipment were confiscated. AQUA impounded another six logging trucks that were trying to leave the area.

Although currently low in wildlife numbers, Coutada 4 has a rich variety of valuable tree species that are the target of illegal loggers. In Mozambique, the 5/2017 law applies both inside and outside conservation areas, which gives ANAC supervision and control over Coutada 4, which is, by definition a protected area.

Peace Parks Foundation has been assisting with the development of Zinave National Park since 2015 when it signed a co-management agreement with the Mozambican Ministry of Land, Environmental and Rural Development. The Environment Management and Conservation Trust (EMCT), who provided valuable advice during the operation, was later also brought on board to assist with the training and mentoring of rangers working in Zinave.

Securing the park’s natural resources is one of the key components in its development and a primary focus for Zinave’s management team.

Once rife, illegal logging has been completely halted within the park.

“Our efforts over the years have seen five logging trucks and as many tractors confiscated from illegal operations. We’ve also confiscated two motor vehicles, made eight arrests and issued several fines. Confiscated logs have been repurposed into desks for local schools, which greatly improved the learning environment for children and created work for a local carpenter,” says Bernard van Lente, Peace Parks Foundation Project Manager working in Zinave National Park.

We are grateful for the support received from all the partners, as well as the National Criminal Investigation Service (SERNIC) and Police. It is only through these kinds of collaborative operations, and taking action, that we will secure the future of our forests.