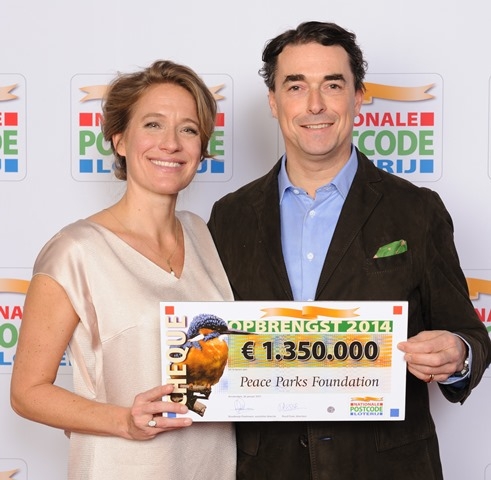 Thank You!
The Dutch Postcode Lottery has been a loyal supporter of the work of Peace Parks Foundation for over 16 years.

In 2014, Peace Parks Foundation and WWF NL received the ground-breaking support of €14.4 million ($16.2m) from the Dutch Postcode Lottery’s Dream Fund for their Rhino Protection Programme to save African rhino from extinction. The Dream Fund gives charitable organisations an opportunity to realise courageous, ground-breaking new projects.

Thus far, Peace Parks Foundation has received over $39 million from the Dutch Postcode Lottery, which has translated into significant and wide-ranging transfrontier conservation development and the Rhino Protection Programme.

Peace Parks Foundation thanks the Dutch Postcode Lottery and the lottery players for this very generous and continued support of its work.

During the Dutch Postcode Lottery Charity Gala (Goed Geld Gala), held in Amsterdam on 26 January, the lottery proudly announced that thanks to its 2.5 million participants, who bought more than 4 million lottery tickets collectively, a total of €312 million ($352m) will be distributed to non-governmental organisations in 2015.

The Dutch Postcode Lottery has been raising funds since 1989 to support organisations working towards a fairer and greener world.

Fifty percent of the lottery’s annual turnover goes to charity. The lottery has steadily grown to become the biggest charity lottery in the Netherlands and supports 92 non-governmental organisations.

Since inception, the lottery has dispensed over €4.4 billion to its beneficiaries.