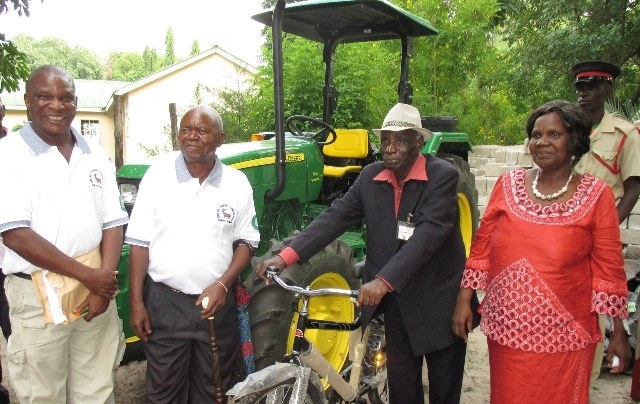 Chief Sekute accepting the tractor and bicycles, with the Mwandi District Commissioner on the far right

Thanks to MAVA Fondation pour la Nature support, 10 February marked the arrival of a new tractor, a new trailer and a rotary mower, all of which will be used in the Simalaha Community Conservancy to manage roads, fire-breaks and for general management.

The event to celebrate the arrival was a colourful one with the attendance of traditional leaders from both the Sesheke District and the Kazungula District, as well as senior government officials. The event was planned by the combined project working group representing both Senior Chief Inyambo Yeta (west of the Kasaya River) and of Chief Sekute (east of the Kasaya).

The opportunity was also taken to ceremoniously hand over the bicycles that will be used by contact farmers in the conservation agriculture component of the Simalaha Conservancy.

The tablets containing the conservation training videos produced by Hitachi Data Systems and Xcelus, with generous support from the Kadans Foundation, were also formally handed over to the conservancy via the district agricultural coordinator for Mwandi District.The tablets are proving very effective in training contact farmers in both chiefdoms.

The effective field management of fire, water, roads and game fences in the conservancy’s new wildlife sanctuary has received a major boost. The equipment will be based at a new field ranger base camp to be established in the middle of the conservancy, close to the Kasaya River so that both chiefdoms can benefit from the new equipment.