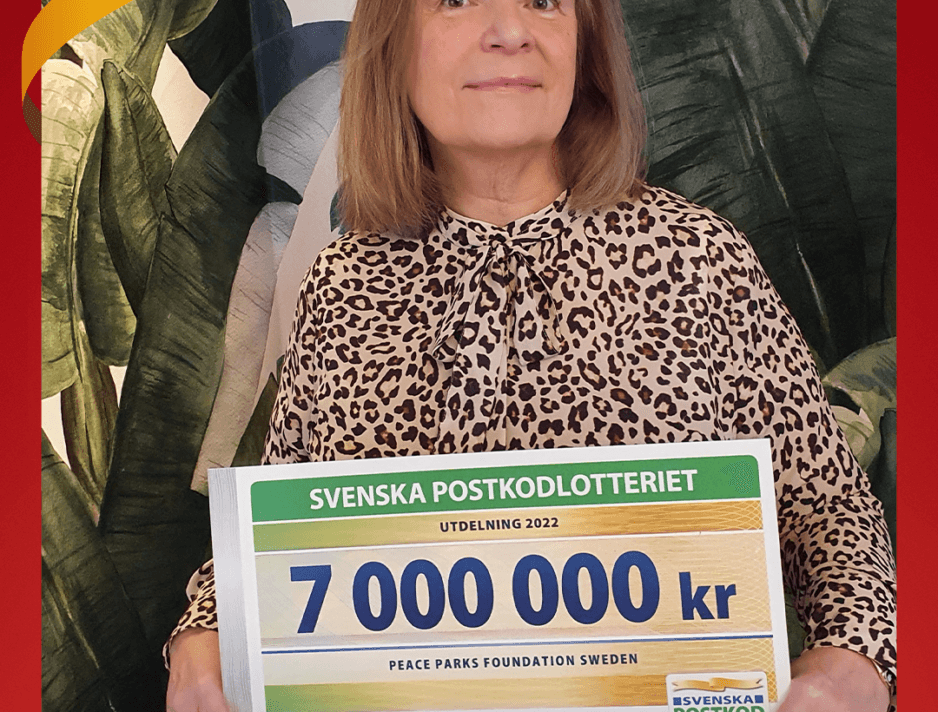 Lena Malmberg, the Country Representative for Peace Parks Foundation Sweden, with the cheque for SEK 7,000,000 received from the Swedish Postcode Lottery.

On 17 March 2022, the Swedish Postcode Lottery, during the online Annual Charity Event, showed its continued support to Africa’s transfrontier conservation initiatives, with a contribution of SEK 7 000 000 to conservation not-for-profit Peace Parks Foundation. With the Lottery’s generous donation, Peace Parks can continue its vital work to re-establish, renew and conserve large cross-border ecosystems across southern Africa.

Thanks to the players of Swedish Postcode Lottery, 59 non-profit organisations were each given a share of more than 1 billion Swedish krona to help them continue their work for people and the planet. Since its establishment in 2005, the Lottery has generated more than SEK 13 billion for civil society.

At the Annual Charity Event, Eva Struving, Managing Director of the Swedish Postcode Lottery shared: “A special day for the Postcode Lottery, but with the war in Ukraine on our minds, it is also a day of mixed feelings”. About 20 of the charity partners that received a contribution, work with Ukraine. Several for many years.

Peace Parks would like to extend a heartfelt thank you to the Swedish Postcode Lottery and the lottery ticket buyers for their continued support, and for recognising that, even in troubled global times, we cannot halt or even slightly pause our efforts to protect the world’s natural assets.

Peace Parks has enjoyed the Lottery’s loyal support for more than 11 years. In additional to general support, the Lottery has also played an important role in funding special projects over the years, which has seen improved livelihoods in Simalaha Community Conservancy, the implementation of the successful Rhino Protection Programme, promotion of conservation outcomes while supporting communities with the Herding for Health project and the goal of educating 100 000 children through the Peace & Changemaker Generation project in partnership with the World Children’s Prize.