17 years of support from the Dutch Postcode Lottery 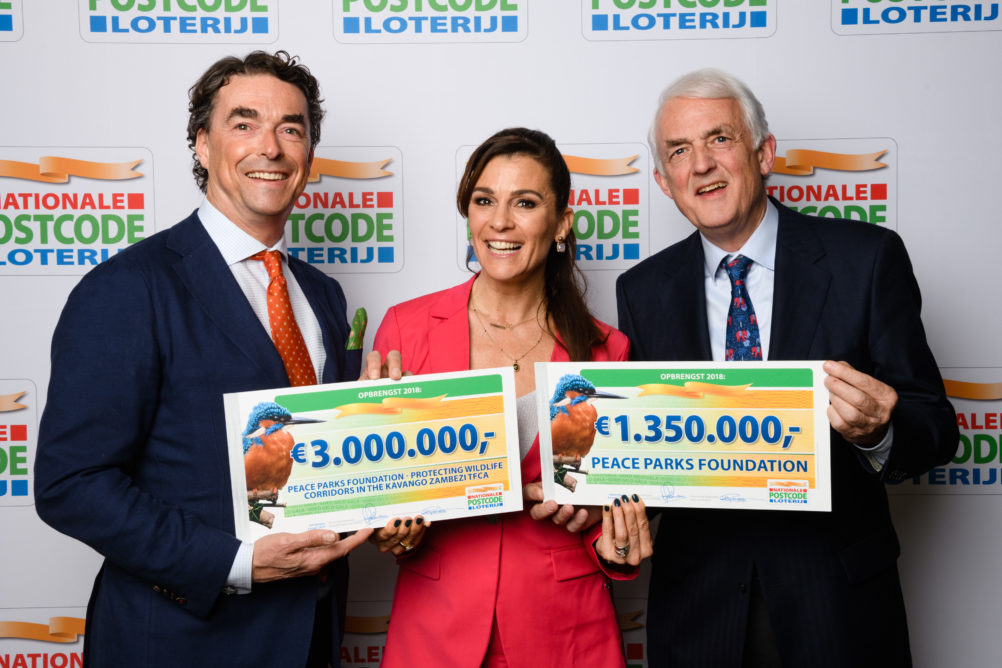 Peace Park Foundation has received a contribution of €1,350,000 from the Dutch Postcode Lottery to continue their work on the establishment of transfrontier conservation areas in southern Africa. The cheque was awarded to the Foundation during the annual Goedgeld Gala held this year in Carré on 4 March. This is the 17th consecutive year that Peace Parks has been honoured by the Lottery, and we would like to extend our heartfelt gratitude to the generous support from the players of the Lottery who make all of this possible.

€3,000,000 extra for Peace Parks Foundation and its local partners!

But the big surprise this year was the award of €3,000,000 for the development of conservation activities and the protection of  elephant and other wildlife corridors between northern Botswana, the Caprivi strip in Namibia, and the Simalaha area in southwest Zambia, within the Kavango Zambezi Transfrontier Conservation Area. During a live TV broadcast of COFFEE TIME on RTL4, director of Peace Parks Foundation, John Loudon was completely surprised with this big news: “In 2014 Peace Parks Foundation, together with the World Wide Fund for Nature, received €14.4 million for a Dream Fund called Rhinos are Worth Gold. I was asked to report in Coffee Time how the rhinos protection efforts are doing. After I explained that all the joint efforts have resulted in a declining trend of killed rhinos by 40%, I was completely surprised by the Head of Charities of the Postcode Lottery, Margriet Schreuders, with that wonderful check for another big Extra Project with elephants and local communities at the centre. Really too crazy!”  [Watch here for the surprise moment in Coffee Time].

The Postcode Lottery announced extra grants to the value of €51 million to support organisations that work to combat climate change and protect and restore nature.  The World Wildlife Fund and Greenpeace were also surprised with an additional contribution of €2 million to further protect the endangered Amazon in Brazil. Urgenda received an additional contribution of more than €1.6 million to support climate issues worldwide. Exra funding was also provided to, among others, Birds Protection Netherlands and the Wadden Society, FSC and Nature and Environmental Federations.

Dorine Manson, Managing Director of the National Postcode Lottery shared: “Nature on our planet is under great pressure due to climate change and ecosystem degradation. The Postcode Lottery has been supporting charitable organisations for years that are committed to a better world. We are proud to be able to support some of them with additional donations today, thanks to our loyal participants. They make the difference.”

Millions from the Dream funds strengthen the North Sea and Wadden Nature.

Earlier this month it was announced that the Postcode Lottery will donate €15 million to the Bird Protection and the Wadden Society for the ground-breaking project “Holwerd aan Zee”, where the Wadden Sea is connected to the Frisian hinterland thanks to an opening in the dike. Nature & Environment and Foundation The North Sea can also count on a donation for a unique project: with €8.5 million from the Lottery they can create living reefs at the foot of windmills at sea. A turning point for the underwater nature in these wind farms in our North Sea.

Money to education in conflict areas and free journalism

In addition to the eye-catching donations in the field of nature and climate, the Postcode Lottery also surprised organisations that strengthen girls’ education. Gordon Brown, former Prime Minister of the United Kingdom, received a check of over €3 million for the children’s rights organisation Theirworld. This allows the organisation to improve access to education for children in conflict areas. The Lottery also announced a number of special donations for organisations working on protecting human rights and investigative journalism, such as Bellingcat, International Consortium of Investigative Journalists (ICIJ, known for the Panama Papers) and Free Press Unlimited.

Training off the beaten track