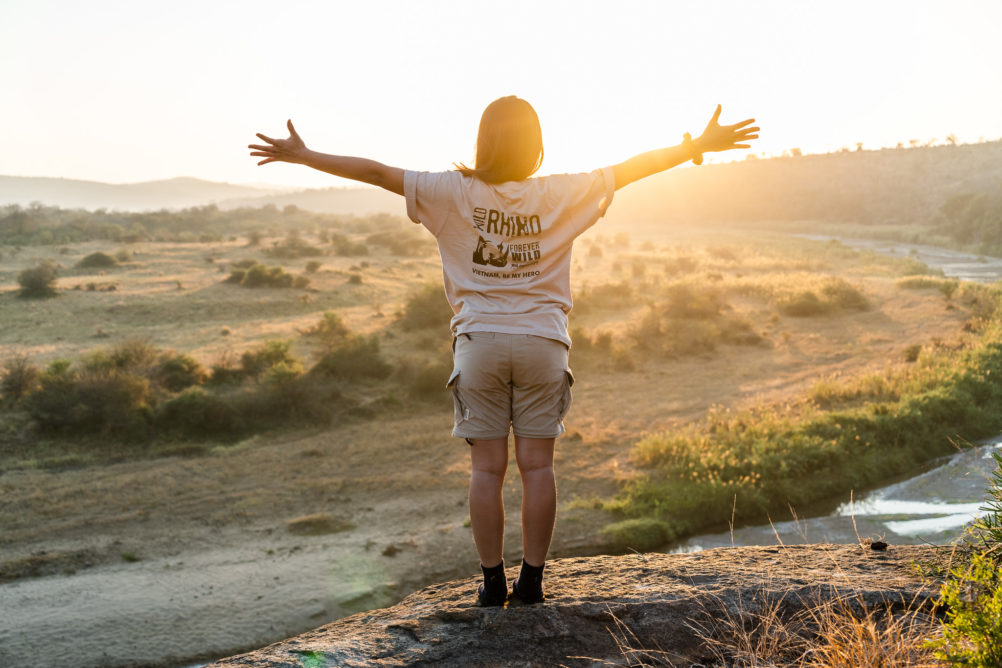 Every two years the Wild Rhino Campaign brings students from Ho Chi Minh City and Hanoi in Vietnam to South Africa to embark on, what they call, a life-changing experience. Aged between 14 and 17, most of these children live in cities that are completely disconnected from the natural world.

Wilderness Foundation Africa, in partnership with Peace Parks Foundation, Olsen Animal Trust and SOUL Music & Performing Arts Academy, launched the Wild Rhino Demand Reduction Campaign in 2014 to research, develop and implement a youth awareness and engagement programme to reduce the use of and demand for rhino horn in Vietnam.

The demand for rhino horn in Vietnam is one of the main drivers of rhino poaching. Initially, we worked with South African agencies to develop awareness products that we could distribute in Vietnam, but we quickly realised that because the use of wildlife products stems from deep-seated cultural beliefs, we needed to work with the Vietnamese to develop solutions that would be culturally relevant and accepted.

Working with 11 international schools in Ho Chi Minh City and three in Hanoi, the Wild Rhino Demand Reduction Campaign runs a competition every two years in which entrants can win a trip to South Africa to partake in a true wilderness experience. The purpose of this is to nurture awareness, insight, empathy and understanding, allowing these young students to return home as dedicated and informed ambassadors for conservation and rhino protection.

At the same time, this exchange encourages communication between those who are exposed to friends or family members using products such as rhino horn and conservation experts who are working to stop the illegal trafficking of wildlife products. 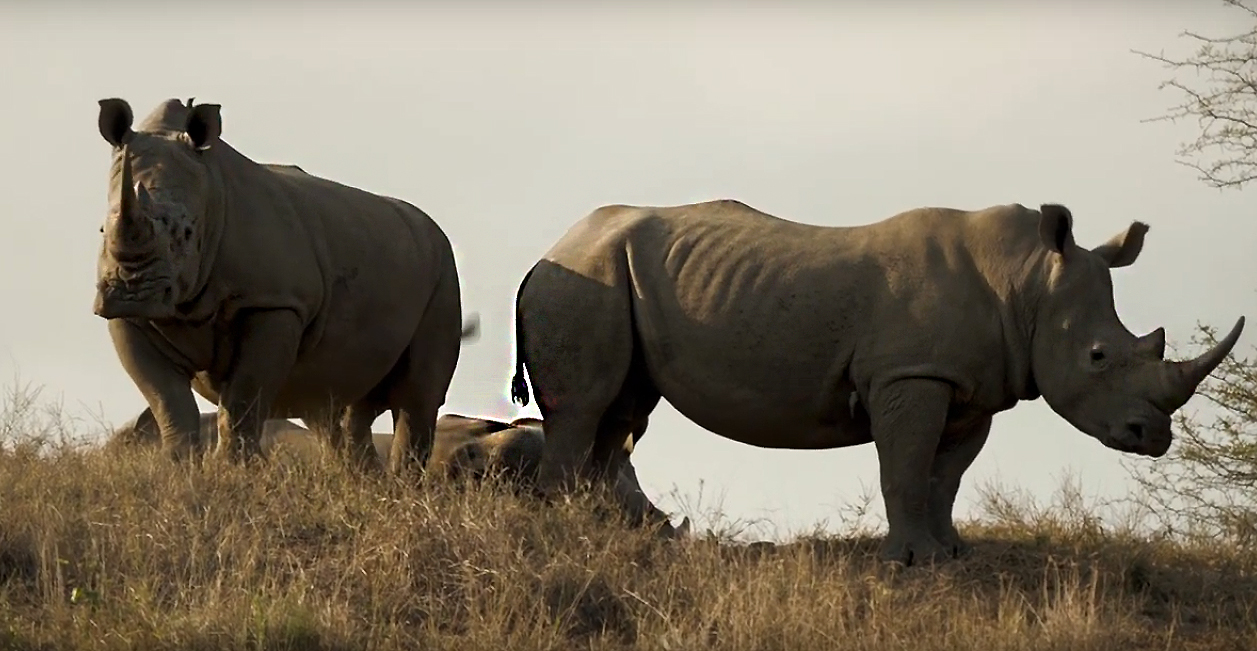 This year, junior students were invited to enter either a poem or a picture, while seniors wrote essays presenting innovative and practical plans to educate their friends and families on how to end the demand for rhino horn. “Upon entering the competition, I never in my wildest dreams thought that I would win. When I did, I was torn between accepting the prize and going on this amazing adventure, or turning it down and focusing on my schoolwork. My father motivated me to accept, saying it was a once in a lifetime opportunity. I am so happy I did!” said Tran Thy Uyên My, a student from the Asian International School in Hanoi. 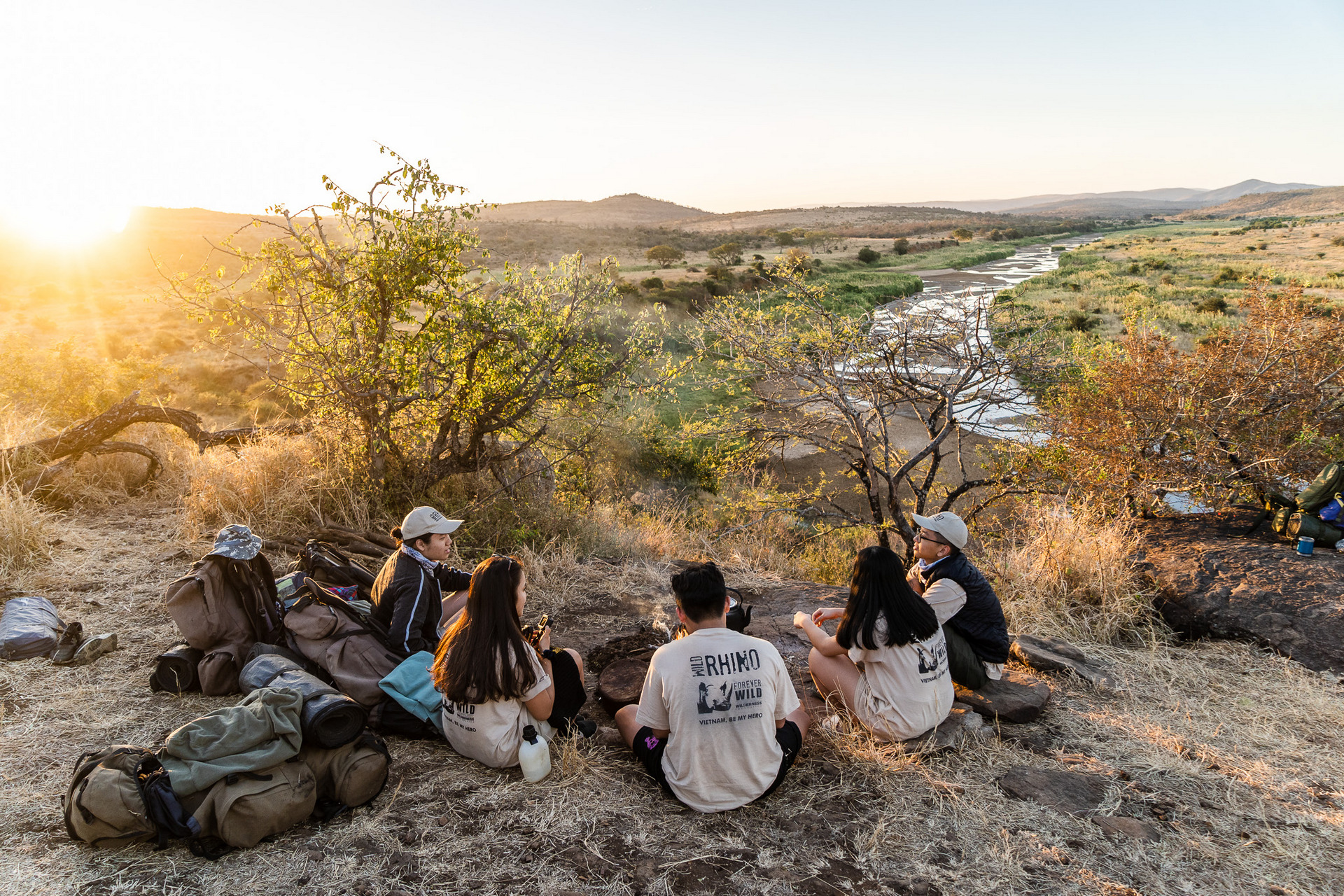 The students embarked on a five-day hike in Hluhluwe-iMfolozi Park in South Africa’s KwaZulu-Natal Province which took them deep into the African wilderness, without any technology to distract them. Tran says, “My friends all said that they would die if they had to be without their phones and access to the Internet for that long!”

Ian Read, a wilderness Leadership School guide, says that it was a truly humbling experience to see the children connect to their natural environment. “In a way, you could see them completely disconnecting from the modern world while finding a deep sense of belonging in a place that is far removed from where they grew up.” 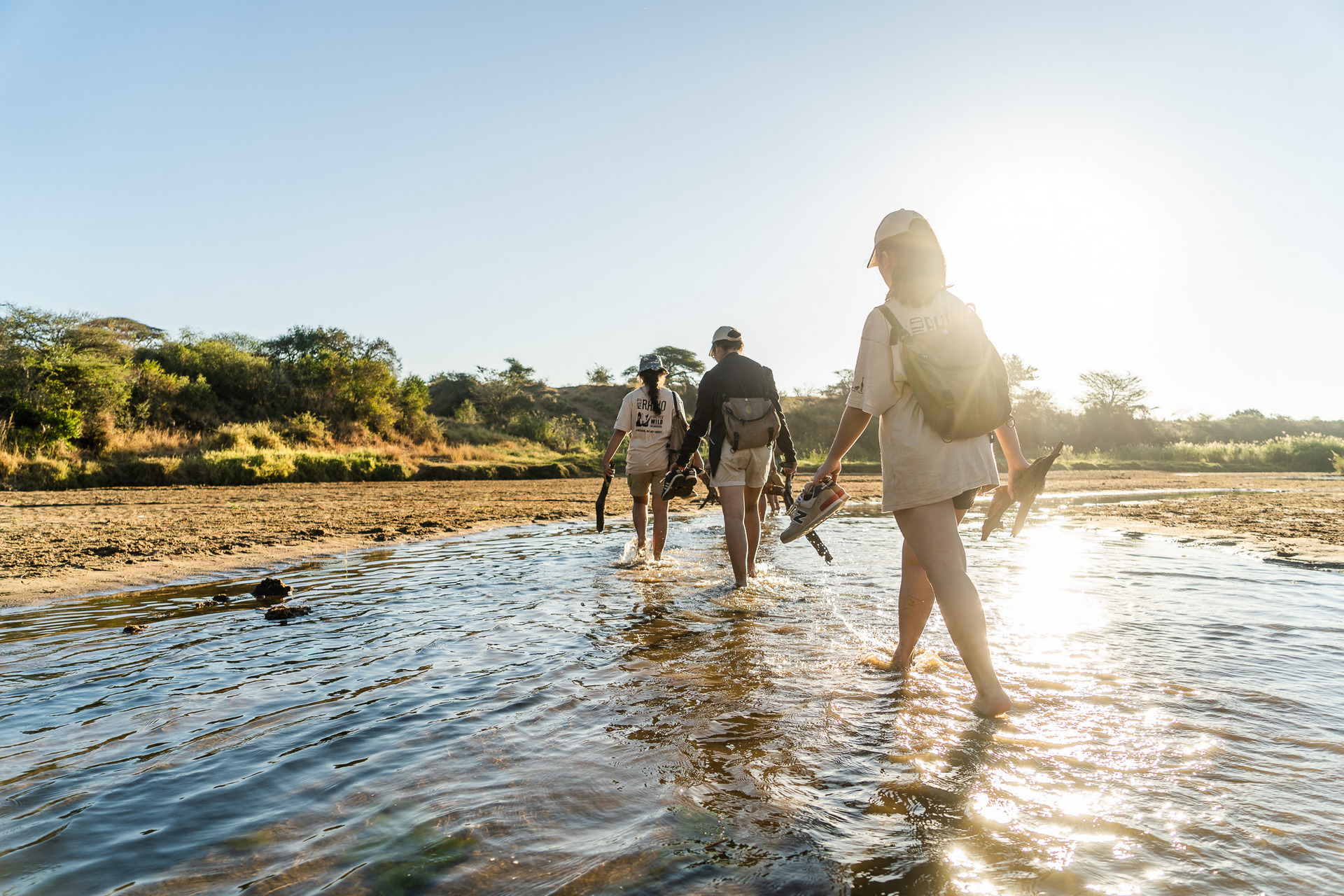 Upon returning from their wilderness trail adventure, students took part in a two-day workshop to explore how they would embrace their task as rhino ambassadors. A moving presentation by wildlife veterinarian, Dr William Fowlds, gave students a glimpse into the realities of poaching, showing both the brutality of the act of killing a rhino and the passion of those who are deeply committed to saving them. Students were cautioned not to accept responsibility for those who consumed rhino products. Ian said, “What you see here does not belong to you. It is not your fault. Don’t go home with fear and anger, those are the tactics used by those who harm rhino. We fight this with what you gained in your hearts over the last few days. Hold on to that.”

On their final morning together, students were invited to present their ideas to the group. Matthew motivated them to think big while keeping in mind that they would be responsible for implementing ideas that were accepted. The students brought to the table some strong ideas, from big music concerts and engaging with religious organisations that prescribed rhino horn powder to followers, to inexpensive social media campaigns that would target youngsters within their age groups. As part of the Wild Rhino Youth Ambassador component of the campaign, the young people will be supported to pursue some of these ideas in their schools and communities. 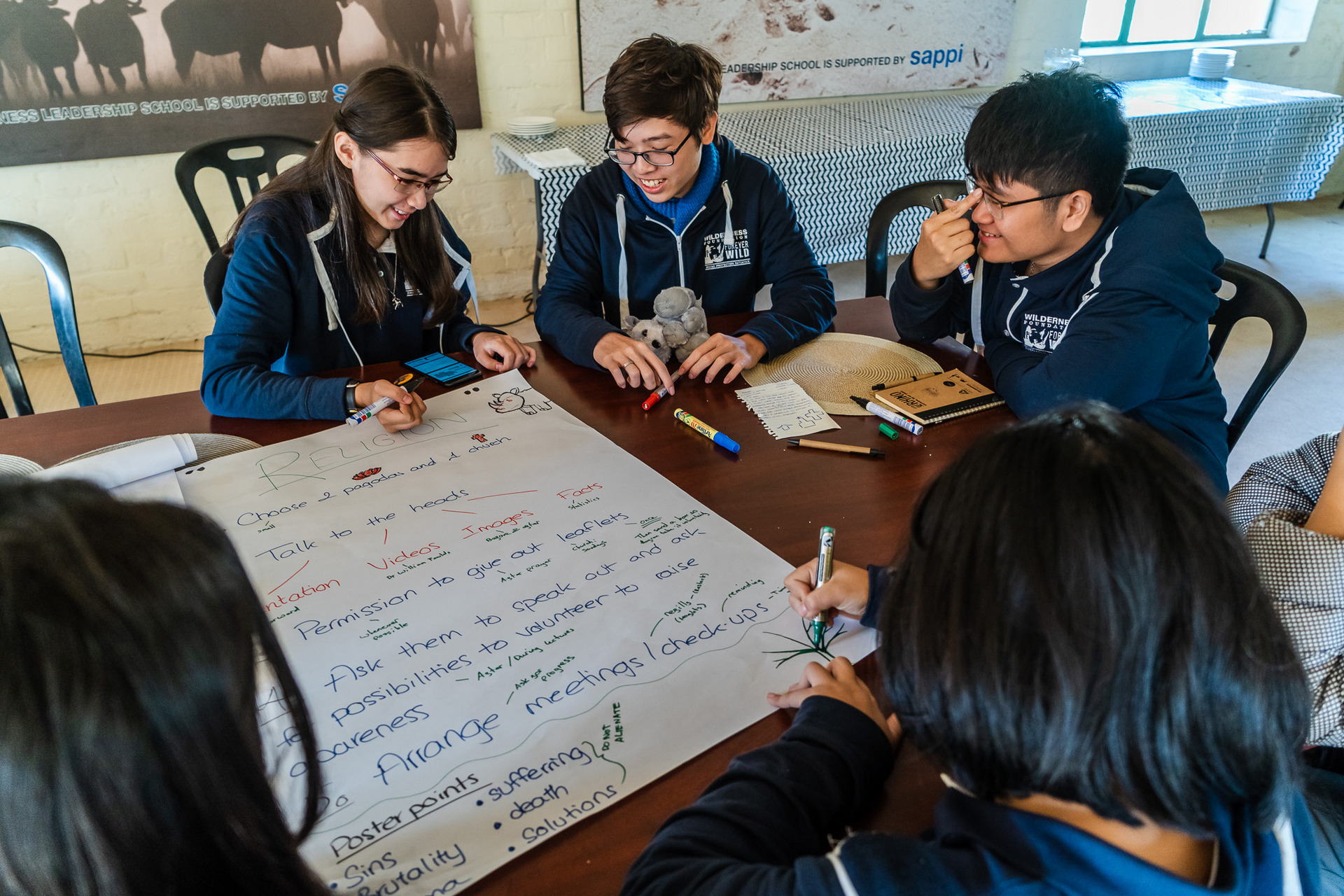 Most noticeable was the enthusiasm with which they embraced their new-found mission to save the rhino. “Poaching rhino is destroying our planet and us humans. Preserving rhino is our responsibility. Not tomorrow, today is the time to save rhinos.” says Le Duong Minh Ha.

The campaign uses three interlinked components to educate and engage Vietnamese youth on the issue of rhino poaching. These include the Wild Rhino Competition, the Youth Ambassador Awareness and Education Campaign, and the Rhino Ranger Superhero Campaign. Each of these aims to ignite a passion for conservation and motivate young people to speak out against rhino horn use and the illegal wildlife trade by becoming ambassadors for the cause within their communities. The Wild Rhino Demand Reduction Campaign has been active since the launch of the first Wild Rhino Competition in 2014 and has reached about 25 000 Vietnamese youth directly, and nearly 1 million indirectly through campaign and youth ambassador social media activities.

More about the Wild Rhino Campaign

Peace Parks Foundation provides support to the Wild Rhino Campaign through the Rhino Protection Programme – a multi-faceted programme that focuses on developing and implementing practical, well-considered methods through which to combat the poaching of rhino, as well as disrupt the supply, demand and illegal trafficking of rhino horn. The programme is implemented under the auspices of the South African Department of Environmental Affairs (DEA) in partnership with South African National Parks (SANParks), Ezemvelo KZN Wildlife and Peace Parks Foundation, and is made possible through funding from the Dutch and Swedish postcode lotteries as well as other private donors.