‘Wild women’ will keep the peace 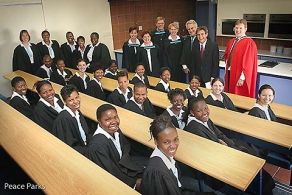 Ready for jobs in the wild, 87 young women from nine Southern African countries have just graduated from the SA College for Tourism in Graaft-Reinet.

They have undergone intensive training in environmental tourism for jobs at game parks.

“The programme increases the numbers of skilled women working in parks the college is associated with through the Peace Parks Foundation network,” said Riah Phiyega, public affairs group executive of Absa Bank, which sponsors the project.

Phiyega said the bank backed the programme for various reasons, including its commitment “to ensuring the survival and ongoing existence of conservation and wildlife enclaves in Africa”.

“We believe this investment will contribute towards bio-diversity conservation and skills development that will improve the lives of rural communities, which will in turn help to foster the economic well-being of the entire region,” she said.

The college, which has grown from a small beginning as a pilot project in 2001, increased its annual intake from 20 students to nearly 90 this year.

The college, brainchild of the late Dr Anton Rupert, was established to train more people for the tourism sector.

“Through obtaining basic skills, the students create for themselves a stepping stone in an industry that is poised to become Southern Africa’s biggest competitive edge, namely environmental tourism,” said a college official,

“The approach is… to try and specifically source women from areas adjacent to `peace parks` and offer them an opportunity to acquire skills for themselves. “They do this by gaining a basic knowledge of best practice in accommodation operations, culinary art, food and beverage, and entrepreneurship.

Guest speakers at the graduation ceremony were top businesswoman Wendy Luhabe and Finnish ambassador Heikki Tuunanen, representing the principal foreign donor of the college. Graaff-Reinet local Anica du Preez is the student of the year.

Mandela honoured for protecting the environment