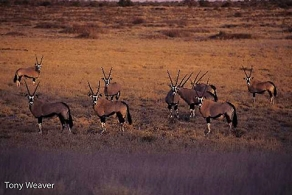 This year in September, South African National Parks (SANParks) celebrated the 75th anniversary of the proclamation of the Kalahari Gemsbok National Park. Hats off to the management of that time and congratulations to the current management! Today the park is joined to the Gemsbok National Park in Botswana to form the Kgalagadi Transfrontier National Park, and it is truly an intriguing corner of our land. I mentioned this region in my September 2006 journal, but space restraints limited going into any detail, so with persuasion from our editor, I have revisited this beautiful, unique true desert landscape.

Situated between the Auob and Nossob rivers, part of the reason for proclaiming this area was to protect the migrating game, especially gemsbok. The antelope population was decimated by settlers who were sent there in 1914 to guard boreholes, which were sunk as a precursor to an attack on German South West Africa (Namibia) during the First World War. Previously only the hardy nomadic San (early bushman) inhabited this hostile environment. The combined park is almost twice the size of the Kruger National Park and covers about 38 000 square kilometres. For the metric minded, this is 3.8 million hectares, making the park one of the world`s largest conservation areas. The name Kgalagadi comes from the San language which is usually translated as `salt pans`. Some call it `place of thirst`, for obvious reason. In conservation circles, the park is also referred to as `the peace park`, as this was the first management agreement reached between two bordering countries and sets the benchmark for many more to come.

Today the antelope again roam the shifting dunes, migrating freely between the two territories. Top of the list are springbok and gemsbok, followed by wildebeest, red hartebeest and eland. Predators abound, with the famed Kalahari black-maned lion ruling over the team, which include leopard, cheetah, black-backed jackal, bat-eared fox, the brown and spotted hyaena, caracal, African wild cats, suricate and mongoose. The bird life is absolutely fantastic, and especially for our bird of prey enthusiasts, the dessert offers a host of possibilities. My personal favourite is the little pygmy falcon, which will normally always be found perched near one of the many sociable weaver nests, hoping to pick up a meal. But my big five list for the park would be the strikingly marked gemsbok; the lovely little meerkats (suricate); the giant black-maned lions; the huge communal colonies of sociable weavers and pygmy falcons. Make sure you seek these out and the rest will be a bonus!

The sand of the Kgalagadi’s duneland is obviously most appealing from the air, if you are fortunate enough to get to do this. The mantle of red is spread over a vast area and is the world’s largest continuous stretch of sand, with bleached river beds, watering holes and camelthorn trees offering the only breaks in the bleak landscape. The dunes are continually shifting, driven by the wind, and this leaves wave-like ripples over the land. The strong winds also create unforgettable sand storms and you do not want to be caught out in the open in one of these. However, the photographic opportunities are wonderful, especially as sunset approaches, with the red dust particles still lingering in the air.

There is no perennial water in the park. The Auob and Nossob rivers flow very rarely and only after thunderstorms will one find water lying in the river beds. Without cloud cover temperatures can reach highs of 40 degrees Celsius in the heat of the day and lows of -10 degrees Celsius during winter nights. In summer, humidity levels rise during the cool nights and this allows the plant life to absorb more moisture, which in turn, provides moisture for the gemsbok that feed mainly at night. Two specie of trees are commonly found, namely the shepherd’s tree (Boscla albitrunca) known as the tree of life, as the leaves, flowers and fruit provide yearround fodder, and the camelthorn trees (Acacia erioloba). These can reach heights of 15 metres and their pods supply good nutrition for antelope. Also found on the dunes is the velvet raison or brandybush (Grewla flava). This is an amazing shrub with strong, elastic stems that are used for bows. Heavily browsed by game, the bark provides excellent fiber. The fruit is edible and is used to make a strong alcoholic `brandy`, sometimes called mampoer. And best of all, the frayed ends of the twigs can be used as a toothbrush if you have lost yours in the sandstorm! But the most life-giving fruits of the Kalahari are the tsamma melon and gemsbok cucumber. With their 90 to 95 percent water content they provide food and moister to insects, birds, rodents, including porcupines, antelope and even worms! The local San relied heavily on these fruits as their only available source of water. In this great thirstland, life revolves around water and moisture retention. It has taken years for the inhabitants to adapt and to survive in this arid environment, but, oh my, is it ever so beautiful!