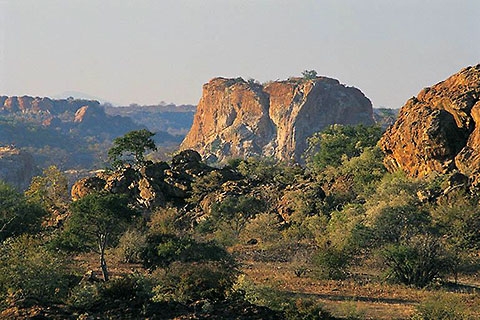 FOLLOWING a journey of more than nine hours on the road from the Kruger National Park, four white rhinos were released into the Mapungubwe National Park in Musina, in the Limpopo Province during a ceremony in the park on Wednesday, 21 July2004.

The release marked the re-introduction of this mega-game species into the park.

The rhinos, two males and two females were released ahead of the park’s official opening on Heritage Day on September 24. For logistical reasons and to ensure minimal trauma to the animals, only one rhino was released from Little Mapungubwe — a small flat area in the park.

The symbolical release on the one rhino was conducted in full view of a media contingent and a number of invited guests including South African National Parks (SANParks) Chief Executive Dr David Mabunda. The other three were released separately.

Declared a World Heritage Site in July 2003, the Mapungubwe National Park (previously known as Vhembe Dongola) is home to the famous Golden Rhino — a symbol of the power of the King of the Mapungubwe people who inhabited the Limpopo River Vally close to the confluence with the Shashe River about a millennium ago.

Of great significance to the park, is that it houses Mapungubwe, the oldest known Southern African kingdom, after which it was named. It also boasts the Mapungubwe Archaeological Site, a national heritage site. This location is the precursor to the Great Zimbabwe and Thulamela Kingdoms and it is where the Golden Rhino and other artefacts were uncovered.

In May last year, SANParks launched the R45,3 million Poverty Relief Programme in Mapungubwe and the park became the largest recipient of the funds.

This followed a substantial grant to SANParks from the Department of Environmental Affairs and Tourism to help create much-needed jobs to improve the lives of communities surrounding all the country’s national parks.

The main aim of the projects was to establish tourism facilities, and make this very unique park accessible to all South Africans.

The Mapungubwe National Park will form part of a transfrontier park incorporating private and state land in South Africa, as well as land in Botswana and Zimbabwe. The national park will form the core of this big park, to be about 800 000ha in size.

“We are very excited about the development in the park and visitors can really look forward to an unforgettable cultural experience and revel in the splendour and beauty that is Mapungubwe,” said Mabunda.

Plans for transfrontier park on schedule