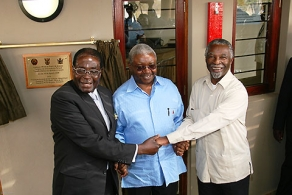 The Great Limpopo Transfrontier Park’s (GLTP) Giriyondo Tourist Access Facility was officially opened by Presidents, Armando Guebuza of Mozambique, Thabo Mbeki of South Africa and Robert Mugabe of Zimbabwe on Wednesday, 16 August 2006. The Access Facility is a link between Limpopo National Park in Mozambique and the Kruger National Park in South Africa.

During the opening ceremony, President Thabo Mbeki said, “The African Union’s programme, The New Partnership for Africa’s Development (NEPAD) urges all of us, as leaders and as citizens of the African continent, to develop and implement coherent action plans and strategies to address the continent’s environmental challenges while at the same time promoting socio-economic development and fighting poverty,”

Giriyondo Access Facility will facilitate tourism flow within the GLTP. Tourists using the facility are expected to produce valid passports, however the visa requirements between South Africa and Mozambique have been waived for all bearers of the passports of the two countries who wish to stay in each country for a maximum of 30 days.

Standard operational procedures are applicable to tourists when making use of the facility. The hours of operation from April to September are from 08:00 to 15:00, while during October to March the facility is open from 08:00 to 16:00. The roads in the Limpopo National Park part of the GLTP are accessible only by 4×4 vehicles. No commercial traffic or vehicles with an excess of a maximum of 4 tonnes (axle load) are allowed to use the Giriyondo Tourist Access Facility.

“I have no doubt that the easy access facilities and open spaces within the Great Limpopo Transfrontier Park, which has been branded as the world’s largest animal kingdom, will be a major attraction before, during and after the 2010 FIFA World Cup. We must surely redouble our efforts to ensure that this unique and rich tapestry of life on our planet is turned into a jewel of the tourism market,” emphasised President Mbeki.

“We need to build on this potential tourist boom and accelerate Africa’s share of the global tourist market, which stood at 4,5% as at 2003,” said President Mbeki. Mbeki went on to add that Transfrontier Conservation Areas coupled with the 2010 FIFA World Cup, provided us with a unique opportunity for exceptional growth in the tourism industry.

Issued on behalf of the GLTP Ministerial Committee: