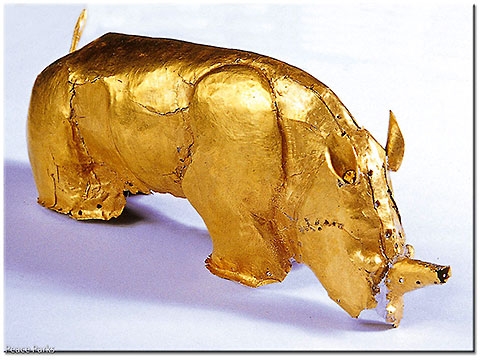 Bandarin’s visit comes after week-long deliberations at the World Heritage Convention in Durban. The highlight of the park is the Mapungubwe Archaeological Site, a precursor to Great Zimbabwe and Tliuiamela. His interest in the park was roused when he was in the country in March for a meeting with African heritage experts.

Prior to his departure for Musina, Bandarin held a briefing with South African National Parks’ (SANParks) senior management, also attended by officials from both the national Department of Arts and Culture and the Department of Environmental Affairs and Tourism. He also visited the Mapungubwe Museum at Pretoria University which currently houses the famous Golden Rhino, discovered during an excavation by scientists in 1932. It is believed that the rhino was a symbol of power of the King of the Mapungubwe people who inhabited the Limpopo River Valley close to the confluence with the Shashe River a millennium ago.

It was the first southern African Kingdom and derived its power from controlling trade with the East Coast and into the Indian Ocean commercial network. This kingdom was the forerunner of the Zimbabwe civilisation and, at its peak, appears to have had 5 000 people living around the Mapungubwe Hill, where their sacred leader lived in seclusion from his people.

“We really are humbled that he chose to visit Mapungubwe – a cultural icon that belongs not only to South Africans, but the world as a whole.

The visit will further highlight the importance of Mapungubwe National Park – particularly in the light of further developments as we finalise preparations for the launch of the Limpopo/Shashe Transfrontier Park,” added Mabunda, referring to the transfrontier conservation initiative that will encompass Botswana’s Tuli Block and Zimbabwe`s Tuli Safari Area.