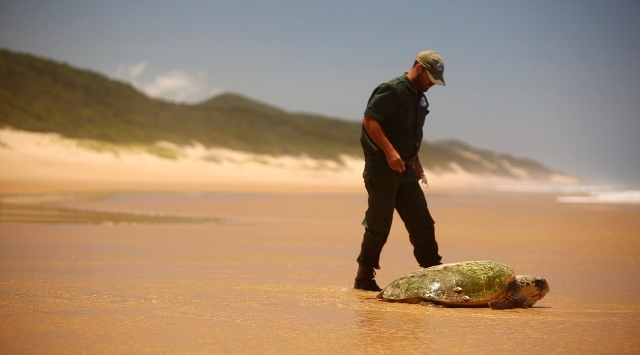 The 2012 turtle monitoring season in Mozambique started on 1 October and will continue until April 2013. Throughout the season, Reserve management and turtle monitors undertake vehicle and foot patrols of the turtle nesting sites, the primary goal being to protect the nesting females and their eggs and also to monitor the number coming ashore to nest.

Thus the entire 350 kilometres coastline from the Maputo River in the north of Mozambique to Mapelane (Cape St Lucia) in South Africa is protected. Based on extensive research into turtle movements, it has been found that the turtles migrate up and down the coastline, confirming the importance of the Marine TFCA as nesting ground.

The rich diversity of marine life in the TFCA includes loggerhead and leatherback turtles, which are carefully monitored on both sides of the international border.

During the night of 11 November 2012, while on a routine turtle monitoring patrol, a leatherback was found nesting under the high water mark. To protect them from being washed away by the tide, the eggs were removed while she was busy laying them. The nest size was then carefully measured and duplicated higher up the beach. The 136 eggs were buried in the newly dug nest and covered in the hope of many hatchlings appearing in about two months’ time. The leatherback turtle is the largest of all living turtles and listed as critically endangered by the IUCN, while the loggerhead turtle is listed as endangered.
Centro Terra Viva, the Machangulo Group, Dolphin Encountours, White Pearl Resort and Pierre Lombard & Family are all actively assisting with the turtle monitoring programme. Centro Terra Viva have assisted tremendously by donating funds for equipment, salaries and fuel towards the monitoring efforts. They have also been giving talks in the schools around the Marine Reserve to improve the understanding of community members of the importance of protecting the turtles.

Thank you very much to all these entities and individuals, as well as to the donors supporting the Ponta do Ouro Partial Marine Reserve – the Machangulo Investment Group, Turing Foundation and the Principality of Monaco.