Translocation of game to the ‡Khomani San’s Erin game farm 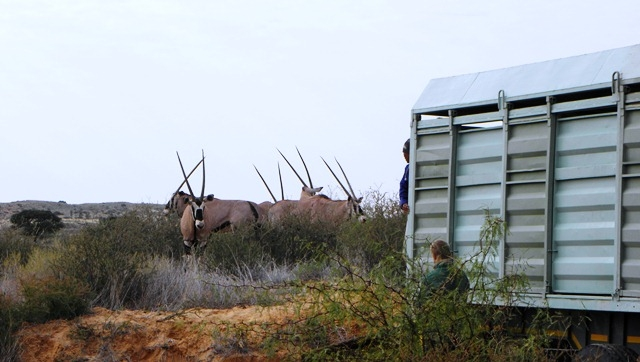 As part of the 2002 land settlement agreement reached between the ‡Khomani San and Mier communities, the government of South Africa and South African National Parks (SANParks), it had been agreed that the latter would also translocate game to the value of R640 000 to one of the ‡Khomani San properties.

The !Ae!Hai Kalahari Heritage Park Joint Management Board and the ‡Khomani San agreed that the best property for this would be their game farm, Erin, at Andriesvale. Erin is fenced with a proper game fence, has an adequate water supply and is located close to the community.

Arrangements were made for the delivery of the game to Erin and the funding provided by SANParks covered all the game, capture and relocation costs. The game was captured on private land by a game capture outfit and the first load was delivered to Erin on 27 June 2012. It is envisaged that 38 red hartebeest, 38 blue wildebeest, 38 gemsbok and 134 springbok will still be relocated.

It is anticipated that revenue generated from ecotourism and hunting, thanks to the presence of the game, will be used to fund improvements on the community’s land, as well as the operational costs of the Bushman Council over the next four to five years.