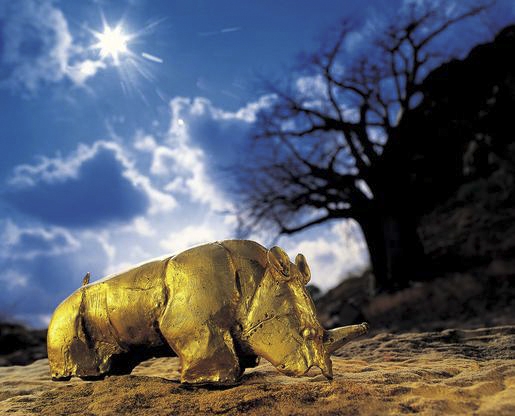 South Africa has the world`s first representational art, a set of slanted lines in a rock that are tens of thousands of years old.

We also have Bushman paintings that date back several thousands of years, executed in a state of trance and hallucination, sometimes with a gift of capturing line, form and movement that modem artists can only stare at but not emulate.

And we have the little golden rhino, which at 800 years old is our first three-dimensional artwork of its kind and the most exquisite. It was found 70 years ago at Mapungubwe, a magical place of rocky outcrops, a short walk from the awe-inspiring view from me clifftops overlooking the confluence of me Shashe and Limpopo rivers, where Botswana, Zimbabwe and South Africa join.

Mapungubwe was a place of legend until the early 1930s when treasure hunters, lured by stories of an ancient African kingdom, began scouring the region for clues. At least one resident knew of its location and had as evidence a distinctive ornate pot that had been given to him by a treasure hunter also privy to the secret.

The story, as guide Elanza van Lente of Sanparks tells it, is that the man with the pot, Mowena, refused to disclose the location to a search party of farmers. But through persistence the party found an exposed grave with the skeletal remains of an arm covered with intricate beads and bangles, that told them they had discovered Mapungubwe and that it was a place of royalty.

The treasure hunters moved in, as did the archaeologists. They uncovered vast quantities of ivory, glass – including the oldest artwork of its kind in South Africa – pottery and beading, including gold and iron work. One grave contained necklaces with 18 000 gold beads.

Beadwork from as far as Egypt and India was found, as well as porcelain of the Chinese Sung dynasty from 960 to 1279.

The little rhino, found in pieces in a royal grave, is about 11cm long and is made of foiled 24-carat gold. The Illustrated London News ran an article about the find on April 1819. The pieces were put together by staff at the British Museum.

Surprisingly, it is still in South Africa. It lives in a room in an imposing stone building at the University of Pretoria where it has pride of place in an impressive exhibition of Mapungubwe`s artefacts. You may look, but not touch, and the treasures are securely behind glass.

Mapungubwe was the centre of a kingdom the size of modem Swaziland with about 5 000 people living at its centre. The kingdom lasted between 1030 and 1290.

They mined and smelted copper, iron and gold, spun cotton, made glass and ceramics, grew millet and sorghum, and tended cattle, goats and dogs.

They divided themselves into royalty, who lived at the top of the settlement, and commoners, who lived below them. The people presided over southern Africa`s first complex society, hundreds of years before Jan van Riebeeck landed at the Cape.

Mapungubwe is now a world heritage site and opens as a national park at mid-year.

It wasn`t easy to arrange a visit. We booked at a bush camp nearby and our hosts spent the day phoning for a reservation. Even when the park opens you will not be allowed near this hallowed place without a guide.

The park covers 19 000ha, but with adjoining areas that may be incorporated and the possibility of a giant transfrontier park it might eventually encompass 850 000ha.

There are no signposts to the Mapungubwe site. We drove around aimlessly, but happily, taking to the distinctive rock formations. Eventually all roads lead to the main place. Prom the main gate, which is under construction, we passed kudu, giraffe and a family of elephants.

In times past, people made their way up and down the 30-metre high natural fortification through a crack in the rock. A wooden stairway now takes you to the top, past a giant wild climbing rock fig tree. In time an interpretation centre will exhibit artefacts recovered at the site.

At the top you can see rock walls built all those years ago. Indentations carved into the rock act as playing boards for the game of morabaraba, still popular today. Other deeper indentations show where corn was ground or where poles held up huts.

At one spot a thick piece of flooring remains, a sort of 800-year-old piece of linoleum. You can see where the king or queen bathed in a natural pool. Pottery shards are everywhere and you can generally survey the kingdom below.

Elephants munched away while above a pair of black eagles soared looking for dassies below.

The experts don`t agree on who these people were, but the consensus is they were either Shonas, whose descendants live in southern Zimbabwe, or Vendas, who live in Limpopo.

Bernard van Lente, the park manager, fancies that the debate will eventually settle in favour of the Venda.

Mapungubwe predates the settlement at Great Zimbabwe. It possibly came to an end because Great Zimbabwe was judged to have a more suitable climate.

Most South Africans know of Great Zimbabwe and many have seen pictures or have visited it, but Mapungubwe has been something of a secret, probably because it did not fit with apartheid ideology. A massive electrified security cordon of two separate fences with six rolls of razor wire and several strands of electric conductors traverses much of the border with Zimbabwe and Botswana. But the fence is absent where the park touches the border and me animals are free to roam.

Elsewhere the fence is no deterrent to hungry Zimbabweans. Locals say the current has been turned down and a determined person with wire cutters can get through in no time.

Though the area hosted these people for several centuries, Mapungubwe itself had a relatively short life of 70 or 80 years. The park has most animals, but no rhino. From June they will be re-introduced, first white and then black. Mapungubwe will have rhinos once again.

By Kevin Davie, This Day