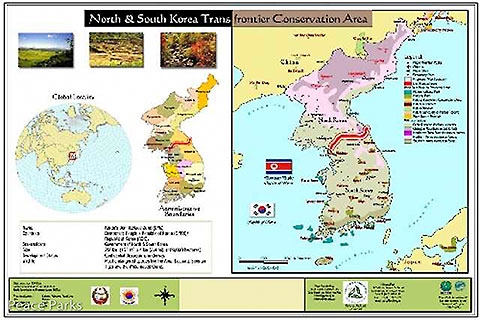 SOUTH Africa`s Peace Parks Foundation has been involved in efforts to get North and South Korea to turn the demilitarised zone between them into a transfrontier park.

The foundation`s chief executive, Prof Willem van Riet, has been assisting an international committee, which appears to be making some progress in promoting this peace park, although tensions over North Korea`s nuclear designs are a bedevilling factor.

Former president Nelson Mandela was also involved in discussions. Even though he has since cut back on public engagements, it is still hoped he might be able to assist in finally getting the project off the ground.

Van Riet last year attended a meeting in Seoul of the so-called demilitarised zone committee. He showed it images of the area bearing out its natural beauty, its geographical features and its feasibility as a transfrontier park.

The foundation, a driving force behind Southern Africa`s remarkable transfrontier-park developments, has won international recognition for its ability to turn satellite pictures into detailled three-dimensional maps of areas earmarked for such parks.

Van Riet received an award from ate Environmental Systems Research Institute at its annual congress attended by about 13 000 international delegates in Redlands, California, last year. Previous winners include the US Department of the Interior and the City of New York.

The institute has been the leading developer of what is known as geographic information systems, which involves the application of various types of information, including satellite pictures, to develop images that are used for town planning and conservation.

“We use it to make decisions and to assist government officials from various countries, conservationists and others to make more informed decisions.”

His foundation`s expertise in the field comes from combining various disciplines. He is a landscape architect, and his geographic information systems manager, Craig Beach, has a degree in zoology and botany, honours in wildlife management and a masters in the use of systems to integrate electronic mapping and ecology.

A transfrontier park jointly managed by the two Koreas could help foster trust between them and so contribute to a political solution. But it will make as wonderful a park.

The demilitarised zone, created when the two Koreas signed their ceasefire agreement in 1953, is 4km wide and stretches about 250km across the Korean peninsula. With an additional buffer zone of several kilometres on each side. Van Riet said it had, except for landmines, been left in a relatively pristine state.

“It contains the last pockets of the region`s exquisite biodiversity. It is said even to have some tigers left, though it is best known for its birdlife,” he said.

In Southern Africa, transfrontier parks have, apart from their obvious conservation benefits, been playing their part in fostering co-operation, particularly as the realisation has been taking hold of the potential which the region`s natural riches hold for tourism.

The Peace Parks Foundation was founded in 1997 by South African industrialist Anton Rupert, with Mandela and Prince Bernhard of the Netherlands, who died last month, as fellow-patrons.

It is based on the idea that nature knows no boundaries, but the aim was as much to foster peace and development in Southern Africa after most of the subcontinent`s debilitating wars of the foregoing decades had ended.

The foundation has been called on to advise on the establishment of transfrontier parks between other Southern African countries, including the Democratic Republic of Congo whose civil war also seems at last to be drawing to an end.

There are already about 170 transfrontier, or peace, parks around the world, serving to conserve nature and as bridges between nations.

Influx of tourists to Mozambique sky-rockets