Safari to the source of the mighty Luangwa 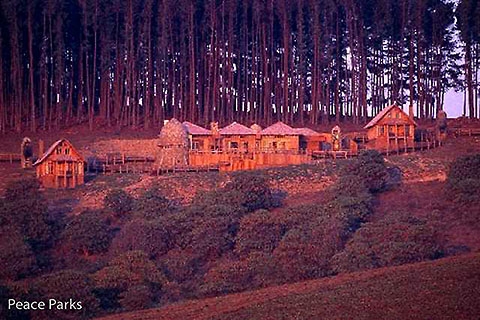 FIONA MclNTOSH journeyed into a remote corner of central Africa to find the source of the Luangwa River before reacquainting herself with Zambia’s major waterway at two of the continent’s prime safari locations.

It’s the small details that often stick in your mind, like the pack of cigarettes stuffed in next to the fire extinguisher by the side of the dirt strip that serves as the bush runway in North Luangwa National Park, 400km north of the Malawian capital, Lilongwe.

With only three camps in this remote, inaccessible part of Zambia, and only occasional flights in, running out of fags is a disaster. But, as tradition dictates in all harsh environments, a quick call on the radio leads to the generous donation of someone else’s supply The airstrip is the depot: collection will be made later in the day.

But it’s not just the little images of this extraordinary safari that remain vivid. On my first night in North Luangwa I awaken in a sweat. Pandemonium has broken out in the river just outside the chalets as hyena celebrate a kill, their laughs and shrieks piercing the still night air. Then silence. And, seconds later, the unmistakable roar of a lion.

I walk nervously to the open front of the reed terrace. The river is flat and calm but the predators cannot be far away and I am convinced I can see their outlines in the reeds. Adrenaline is pumping. That’s my sleep over for the night.

On the second night, a vast black shape splashes noisily through the river just in front of the fire. Buffalo. Then a second, more graceful silhouette follows. Lion. It`s incredible stuff and I begin to realise why so many visitors to North Luangwa are return guests.

Now I’ll admit that I’m not really the safari type. I love seeing big game and walking in the bush, but only for short periods: then I tend to tire of the routine, the pace of the group and the relative inactivity. So, when I agree to go on a Source of the Luangwa safari, it was with some trepidation.

The factor that really clinched it for me was that not only were we going to visit Central Africa’s four prime game reserves but we were also going to play at being explorers, trekking high into the Mafinga Mountains to look for the source of the Luangwa River.

The trip starts with an exciting flight in a light aircraft to Vwasa Marsh in northern Malawi, where we spend three days walking by the lakeside and enjoying close-up encounters with elephant, hippo and numerous antelope.

The view from the simple chalets of Kazuni Safari Camp across buck-filled plains to the lake is mind-blowing and, since this is the only accommodation in this relatively anonymous and remote reserve, we explore the lakeside and surrounding bush at our leisure, photograph sparring hippo, listen to the twittering of the birds and admire the typically African scene through a foreground of dangling sausage-tree pods.

From Vwasa we journey through typically African plains and villages full of waving kids and begin the gradual ascent to the Nyika plateau. Sausage trees and crops give way to gnarled trees clothed in old-man’sbeard lichens and then, as the vehicle climbs through the cool highland air, to open montane grassland.

Chelinda Lodge, our home for the next few days, is run by a wonderfully entertaining couple. David and Robyn Foot, and the Feet as they are inevitably known – know how to do things in style.

The big wooden lodge has a homely feel with log fires in each chalet and wonderful terraces from which to admire the rolling hills and grazing herds of antelope.

The birding is exceptional and the wildflowers were at their finest during our October visit so we enjoyed slow strolls with David and more adventurous activities such as hiking, horse riding, mountain hiking and fishing.

I wished I could stay longer because, to get a real appreciation of the virtually uninhabited plateau, you need to sign up for Nyika Safari’s speciality, a multi-day horse safari.

Other guests regale me with their adventures. You ride hard during the day but overnight in true colonial style, in spacious safari tents, bathe your sweaty toes in enamelled footbaths – naturally, darling – and enjoy meals prepared by a top-notch chef. Ah, next time …

This is a special piece of Africa, and despite the large herds of roan antelope, mountain elephant and the odd lion you can imagine early Scottish missionaries genuinely feeling that it was a home from home.

A mission station, four hours from Nyika on the country’s western border, is the start of our great trek, and the part of the trip to which I have most been looking forward. As our vast party of porters unloads the vehicles and packs tents, food and other camping essentials into bags, inquisitive youngsters gather round and smiling women eye us coyly.

The caravan finally sets off, the porters striding rapidly ahead despite their burdens. We move at a more sedate pace, followed, like the Pied Piper, by a colourful gaggle of local children for whom we are clearly quite a novelity.

The trail is tough and steep and, despite the early hour, the sun beats down on our backs. But we forge on, enthralled by the high mountains and the feeling of space. Spring flowers light up every slope and, by the time we stop for lunch in a convenient plantation at the top of the first ridge, we feel like true expeditioners.

The final climb to the summit ridge and highest point in the Mafinga mountains takes a couple of hours. Behind us stretch the flat Malawian plains and the distant Nyika plateau, while in front of our eyes deep vegetated clefts cut into Zambia.

No detail has been overlooked and we enjoy a bath in a cool mountain stream and a gourmet meal washed down with fine wine before retiring early, excited at the prospect of finding the source the following day.

At dawn sees us heading back up to the watershed. In the wetseason the Luangwa would rise here on the dividing ridge but at this time of year we need to search for the spring that feeds the stream.

After much debate and searching in fern groves and clumps of trees, the triumphant cry goes up. The source of the Luangwa has been located. A muddy, shallow pool shadowed by towering ferns, it is a humble beginning for the lifeblood of Zambia that flows the length of the country until it pours into the mighty Zambezi.

The next time we see this river it is 100 metres wide, meandering through its vast floodplain in South Luangwa National Park. We have left Malawi behind and are in a light aircraft heading for the remote Mwaleshi Camp in North Luangwa National Park. The pilot gives us the game-viewing experience of our lives. Herds of buffalo and antelope scatter at the noise of the plane but the vast pods of hippo barely acknowledge our presence.

The river is low and the vegetation quite brown, the ground crying out for the much needed ran now expected imminently We are the second last group of visitors to the northern section this season. In a couple of weeks the three temporary camps will be dismantled and the single dirt road will be impassable.

It is the exclusivity and quality of the walking safaris that draw visitors : to North Luangwa and we are not disappointed. We see lion on every walk, huge hippo pods;; elephant and plains game galore and have our share of adrenaline-filled encounters.

The quality of the guiding proves exceptional: no matter what the situation. Ed Sayer, the manager-cum-guide, has everything under control, shooing off approaching hippo, calmly gathering us together and moving us off as we stumble on a wounded buffalo, and afterwards entertaining us at mealtimes with his disarming smile and boyish giggle.

The women in the party are totally besotted and vie for pole position – and the best view of his gorgeous legs. Ed takes it in-his stride, having us in stitches with his tales of American divorcees shamelessly throwing themselves at him.

Khaki fever is a well-known phenomenonin the bush.

But the luxurious and intriguingly designed chalets – one of which has a massive tree as its central feature – and the carefully tended lawns of Tafika camp belie the wildness of the place.

Hippo wander through at night and the game viewing is incredible. We hike, canoe and drive to pools with countless hippo and see leopard on sunset game drives.

But the highlight is the early- morning microlight flight. Host John Coppinger, a mad keen pilot, swoops low over the river as he pointed out the remarkably regular chainlink pattern that the hippo rest in, with then heads on their neighbours’ rumps, and the vast oxbows for which the Luangwa is known.

On our last night we see a serval cat arid then watched entranced as a leopard stalks a puku. My heart is in my mouth: I can barely watch. Closer and closer the leopard creeps, the puku oblivious to the danger, and then it springs – but misses. I almost weep with relief.

These safaris are far-too hard-core for me.