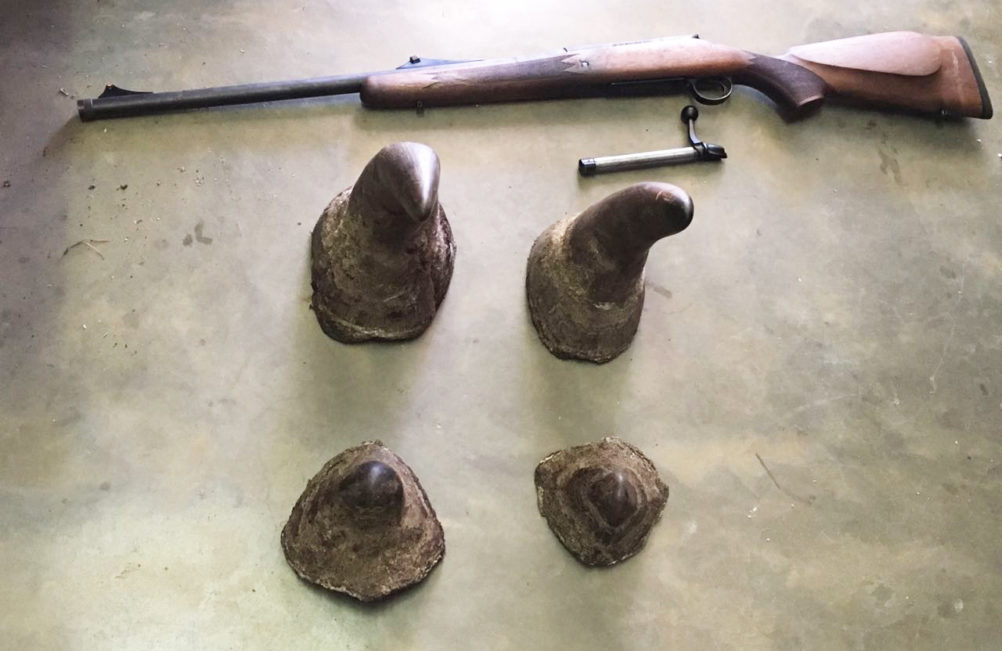 Mozambique has sent a clear message of no-tolerance to perpetrators of wildlife crimes, handing down prison sentences of 17 and 19 years respectively to two rhino poachers.

Rapid response, well-coordinated efforts and irrefutable evidence provided by the Limpopo National Park anti-poaching unit, working in close collaboration with their counterparts across the border in Kruger National Park, led to the arrest and conviction of the two poachers in Mozambique.

Events started to unfold when, on the evening of 29 August 2018, South African National Parks rangers in Kruger informed members of the joint Kruger-Limpopo security group that a gunshot had been reported. On investigation the next morning, they discovered two poached rhino carcasses just across the border inside Limpopo National Park with horns removed. 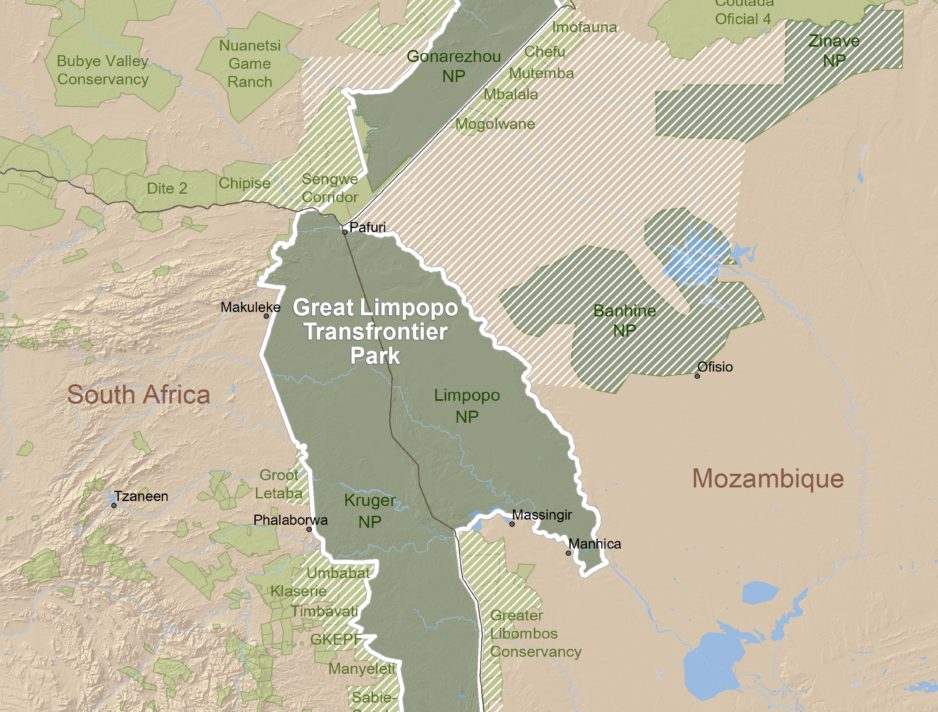 Limpopo NP responded to Kruger’s alerts by rapidly deploying a patrol unit of National Administration for Conservation Areas (ANAC) rangers to the scene by vehicle. Tracking commenced, but unfortunately, fading daylight forced the teams to pause the search on the ground, whilst investigations continued behind the scenes.

Benefitting from a powerful community information network that has been put in place over the years, a phone tip indicated that the rhino poachers had arrived at a village in a neighbouring district. A patrol from the base closest to this village moved in and captured the suspects, who were found in possession of the two pairs of horns, as well as a .375 rifle and ammunition. Following standard processing at the Limpopo NP headquarters, they were handed over to the Mapai district police and prosecutor. 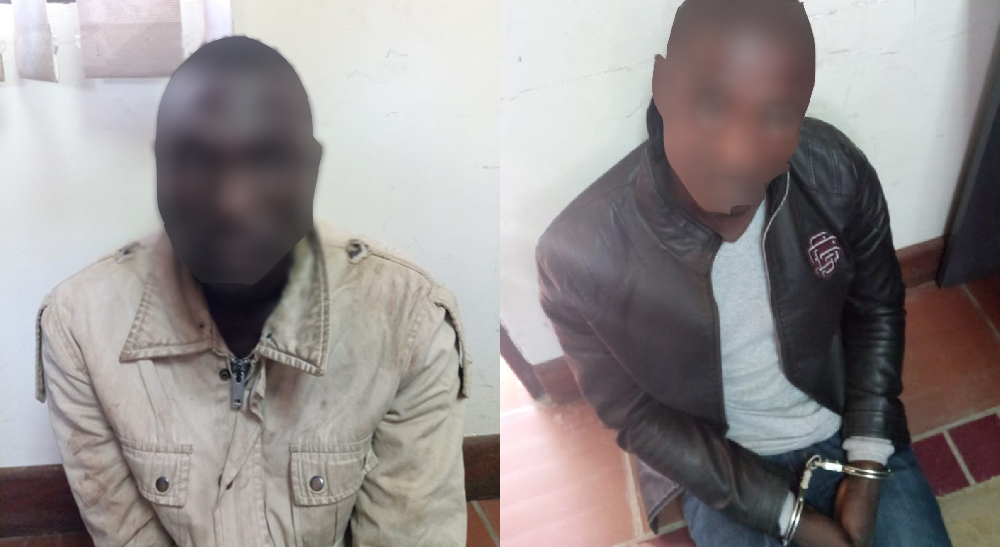 With the perpetrators in hand, the teams on the ground needed to ensure that all necessary evidence would be collected and compiled to put forth a strong case in court and guarantee a fitting conviction. Intricate crime-scene analysis was conducted at the poaching site by the joint Kruger-Limpopo investigation team. They found bullets in the carcasses, which were registered as part of evidence to the case. In addition, the Limpopo NP crime investigation unit provided the prosecutor with hard evidence of:

The trial process started in June 2019 in the Gaza Provincial Court. The defendants made use of two experienced advocates. They pleaded not guilty and claimed that their detention by Limpopo NP was unjustified. The professional investigative, forensic and procedural evidence gathered and presented by the park’s anti-poaching unit was however indisputable.

After three sessions, Tomas Maluleque (33) and Orlando Matuassa (26) were found guilty in Xai Xai Provincial court on 30th Aug 2019 for poaching two rhino and the unlawful possession of four horns, firearms and ammunition. They received sentences of 19 and 17 years respectively. Added to this they both received a fine equivalent to $96 (5958.4 Mozambique Meticais) and were ordered to pay restitution to Limpopo NP amounting to $20 000 (1 276 800 Mozambique Meticais) each.

In November 2018, three more poachers were arrested whilst attempting to enter Kruger just 15km south of where the initial rhino incident had taken place in August of that year. Since then, there have been minimal incursions and animals poached along this section of the border compared to the statistics of 2017. Court proceedings for this ongoing case are pending.

Bringing forth justice in conservation

The upsurge in anti-poaching successes in Limpopo NP can be directly attributed to the close collaboration between ANAC and Peace Parks Foundation, supported by the Environment Management and Conservation Trust (EMCT) and the French Development Agency (AFD).

Peace Parks has mobilised funding to appoint new senior operational and technical staff to coordinate intensified ranger tactics and investigative procedures. Central command centres have been established and equipped with the latest technology systems. This includes a new digital radio system that enables cross-border communications with Kruger. In 2018, 29 additional rangers were trained and employed. Furthermore, funding is being used to cover the operational costs of a dedicated aircraft; provide advanced field training to rangers; operate a ranger incentive scheme; as well as equip rangers with vital patrol gear and facilities. To address a deficiency in aerial support to rangers on the ground, the park has been provided with a helicopter procured and operationally supported through funding from Peace Parks Foundation, the GEOS Foundation, and EMCT – who provides technical advice on anti-poaching operations to ANAC. EMCT also assisted in establishing the park’s first canine unit this year.

Over the past five years, Peace Parks has provided similar support to Kruger through the Rhino Protection Programme, with amongst other things more than 300 rangers trained through the Southern African Wildlife College; vital equipment and infrastructure provided; and various innovative technology-based solutions deployed including the ground-breaking Postcode Meerkat wide area surveillance system. This support was made possible through support from the Dutch, Swedish and UK People’s Postcode Lotteries as well as various private donors.

Peace Parks Foundation also works closely with conservation authorities in South Africa and Mozambique in an effort to bolster specialist investigative capacity, focused on gathering information and building cases against perpetrators of wildlife crime. A primary focus is to facilitate improved coordination of activities between conservation and security agencies, thereby centralising information-gathering and analysis. This also includes compiling robust cases to hand over to the authorities for the successful prosecution of rhino and other wildlife crimes.