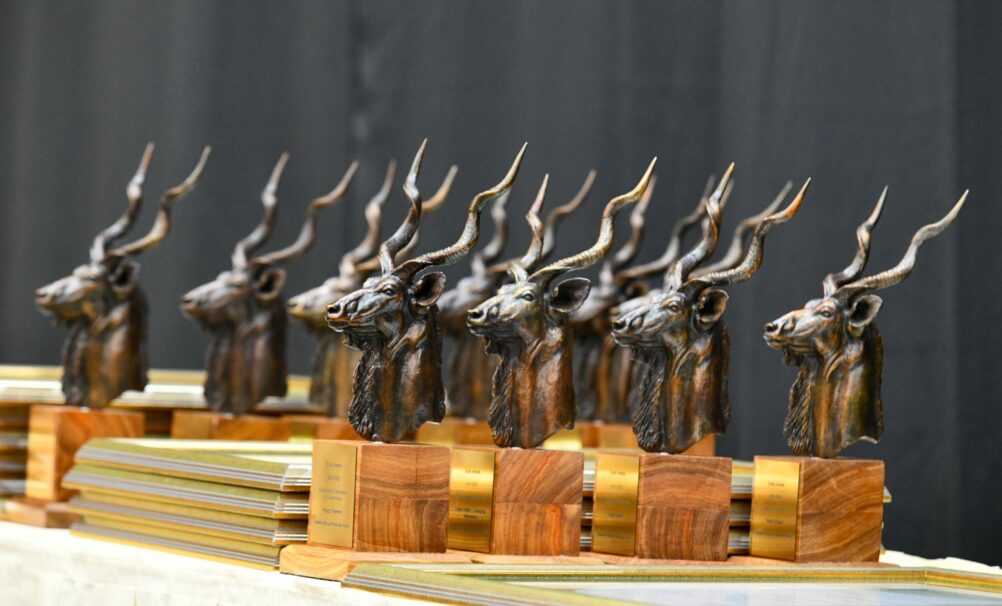 We are immensely proud to be the 2022 recipient of SANPark’s prestigious ‘Valued Partner’ Kudu Award, in recognition of the strength and dedication of Peace Parks’ work combatting wildlife crime in Kruger National Park.

The Kudu Awards are a celebration of national pride and devotion to conservation efforts across South Africa. They reflect the merit of fostering the precious interest and passionate intent we all rely upon to safeguard wildlife and wild spaces. Peace Parks was previously honoured with the Corporate Contribution to Conservation Award (Associated Partner) award in 2014.

“The SANParks vision, ‘a world class system of sustainable national parks reconnecting and inspiring society’ encourages all of South Africa to celebrate the achievements of those around them and to pay tribute to those who work effortlessly to put our parks at the forefront of conservation.” 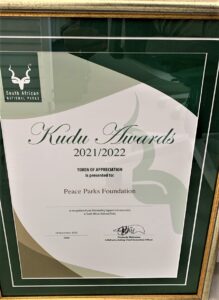 The ‘Valued Partner’ award speaks to the power of positive contributions made by those that join forces with SANParks to protect. Strength in numbers means better chances of overpowering threats to wildlife and regenerating ecosystems. For Peace Parks Foundation, it’s both an acknowledgement of dedication and a vital reminder to continue investing in strong partnerships – an approach we’ve long since embraced as vital to achieving real impact within the protected areas we co-manage or support across southern Africa.

The Great Limpopo Transfrontier Conservation Area was one of the first formally established peace parks in the region, and Peace Parks has been supporting Kruger National Park as an integral component since 2001. For the past 8 years, the organisation’s Rhino Protection Programme has implemented core interventions to protect the park’s vital and vulnerable rhino population. Key management and capacity, equipment and infrastructure has been provided alongside the deployment of innovative technology-based solutions such as the ground-breaking Postcode Meerkat wide area surveillance system. Through this partnership close cross-border cooperation was also established between Kruger National Park and the neighbouring Limpopo National Park in Mozambique – an ongoing collaboration that has been crucial to reducing poaching coming in from the eastern boundary.

Our focus is to develop and implement practical solutions for the protection of vulnerable species, such as rhino, and build up investigative capabilities to reduce wildlife crime. This award is a huge encouragement to the entire team to see that the work and support we give is being appreciated by one of the best and most respected conservation management agencies in South Africa, and the world. Kruger, the focal point of our joint efforts, is particularly special. Without rhino, there’s no Big 5; in protecting them, we’re helping to maintain this flagship park as a much-loved Big 5 destination and preserving one of the world’s largest remaining populations of wild rhino for future generations.

Conservation collaboration is powerful – enough to build bridges across borders and confront global challenges; partnerships bring much of that collective value to the table. We thank SANParks for this honour. It’s a resounding win that direct cooperation and mutual support is becoming the rule rather than the exception in fighting wildlife crime.