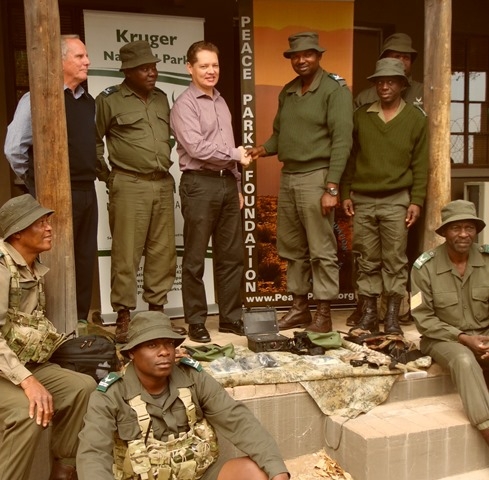 Werner Myburgh (middle) handing over the night-vision equipment to the rangers. Major-General Jooste is on the far left

On 9 July 2015 the Kruger National Park’s ranger corps received a collection of top-of-the-range monocular night-vision equipment to the combined value of R3.4 million from Peace Parks Foundation, in order to assist them in their efforts to combat wildlife crime.

Said Peace Parks Foundation CEO, Werner Myburgh: “Field rangers remain the most critical first line of defence on the ground against rhino poaching. With most incursions happening at night, and as criminal syndicates become more and more sophisticated in terms of their tactics and equipment, Peace Parks Foundation is proud to assist South African National Parks in levelling the playing field with advanced technology that not only ensures a safer working environment for the rangers but also keeps them one step ahead of the poachers.”

Night vision has become a key opto-electronic technology in modern conflicts that take place in the dark. The new equipment allows for thermal imaging and high quality depth perception, whilst offering a comfortable and ergonomic size and shape. 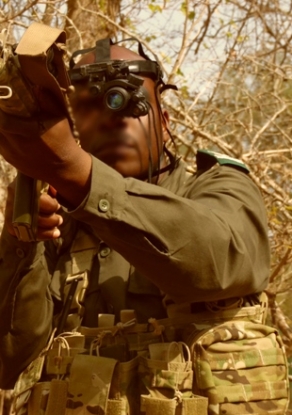 Major-General Johan Jooste, who heads up Kruger National Park’s counter-poaching activities welcomed the contribution: “This generous contribution of such a large quantity of much needed night-vision gear will help rangers throughout the park to gain the advantage and be pro-active, thus not only saving rhinos, but also safeguarding themselves. The equipment can be seen as a force multiplier that makes the ranger more effective and the same number of people can have a greater effect. We salute the Peace Parks Foundation as a valuable ally in our rhino campaign.”

The contribution from Peace Parks Foundation also includes training sessions to teach the rangers how to most effectively utilise the night-vision equipment for their specific needs within the unique Kruger National Park environment.

Through the Rhino Protection Programme, Peace Parks Foundation supports various projects that aim to stop or deter illegal activities on the ground – i.e. at the frontlines of the poaching war; destabilise and interrupt the supply chain through interventions such as intelligence operations; as well as efforts to reduce market demand for illegally traded rhino products. The Rhino Protection Programme is implemented under the auspices of the South African Department of Environmental Affairs in partnership with South African National Parks and Ezemvelo KZN Wildlife. The implementation of the multi-faceted programme is made possible through funding from the Dutch and Swedish postcode lotteries and various other private donors and foundations.