NEW GRADUATES COMMIT TO BEING LEADERS IN CONSERVATION 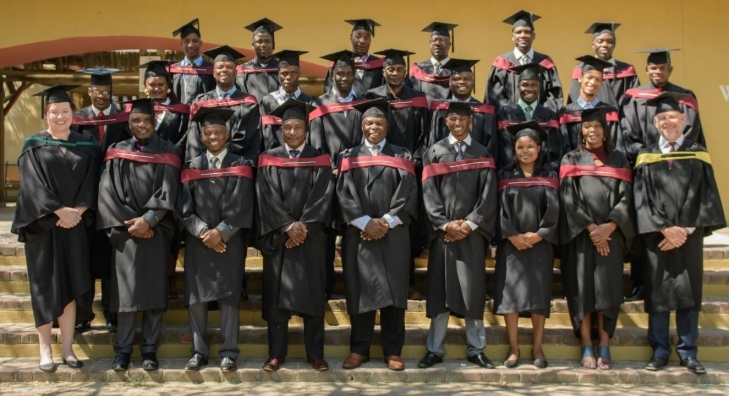 These graduates, accompanied by Anelle Rautenbach and Malcolm Douglas from SAWC, successfully completed a Higher Certificate in Nature Conservation: Conservation Implementation and Leadership.

Leadership and man doing more to ameliorate his relationship with nature was the theme for this year’s Higher Education and Training (HET) Wildlife Area Management Qualification graduation at the Southern African Wildlife College (SAWC). The graduands, hailing from seven countries, were honoured for their hard work and commitment to become better managers of our natural resources. This year the countries represented by the 43 graduands included Congo, Malawi, Mozambique, Namibia, South Africa, Zambia and Zimbabwe.

Mr. James Milanzi spoke earnestly of the work involved in the conservation sector by addressing the conditions in which conservationists work and emphasized the fact that leadership plays a pivotal role in the sector. “In conservation, you work long hours in adverse and inhospitable conditions. Rain, intense heat, dangerous animals and wildlife criminals are just some of these elements. Notwithstanding this, when you apprehend a poacher, you are not necessarily the hero when you face their relatives and friends who may be more powerful than you. But, be that as it may, your job is not to please those that confine themselves to perfecting the act and art of illegal activities,” he said.

“Man has failed to conquer his own desires that are leading to the untold challenges resulting in land degradation, species loss, global warming and poverty. The biggest challenge we have is not necessarily the lack of funds and resources but the right leadership. It is therefore gratifying that with the support of government and conservation agencies in southern Africa, the College was founded and has developed based on the needs of conservation whilst inviting and supporting quality students from across the region to mould them as leaders in conservation. This must be applauded, “he added.best football odds and expert football predictions oddslot.co.uk today football predictions from the experts

Mr. Dirk Pienaar echoed the sentiments on the need for leadership skills. “Conservation leaders in particular need to be system thinkers. Leaders and managers, who emerge from the training offered by the SAWC, have a strong sense of giving something back which is guided by ethical mindfulness in their everyday life. For these leaders, ethics is not simply a matter of knowing, more importantly it is about doing,” he said.

He ended by thanking the College for creating a platform for future everyday leaders to be able to engage and hone their skills towards finding new solutions which will make the world a better place not only for us but for our children and their children.

The sought after Southern African Wildlife Trust (SAWCT) scholarship awards were scooped by Zimbabwe. These went to the three highest achievers in the Higher Certificate class namely Bochiwe Dhliwayo, Nothando Rosslyn Moyo and Richard Mahlangu. The scholarships will give these students the opportunity to continue with their studies and complete the Advanced Certificate programme in 2017.

Mr. Malcolm Douglas, Manager of the Wildlife Area Management Qualification Courses, officially closed the ceremony when he thanked the students for their hard and steadfast work during the year. He wished them well as they go back to their places of work to enter a new phase of their careers.
Peace Parks Foundation proudly supports the SAWC to enhance conservation efforts in transfrontier conservation areas across Africa. For more information on the College, visit www.wildlifecollege.org.za.

Pres The Balance Of Nature To Traditional Medicine Schools