More Than A Game Reserve 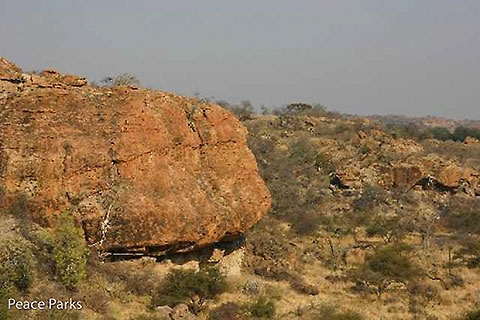 BEYOND the Soutpansberg in Limpopo lies a stretch of ruggedly beautiful, largely undiscovered land. This most northerly part of South Africa extends to the Limpopo River, where its sea of stunted mopane frees makes way for lush riparian forest. Where the wide curve of the Shashe River meets the Limpopo – and South Alirica, Botswana and Zimbabwe meet – South Africa’s newest national park, Mapungubwe (“place of the jackals” in Venda) is situated.

The road to Mapungubwe is straight and narrow, fringed by straw-coloured grass and miles of high game fencing. It passes through settlements of only a few scattered buildings – Kalkbank, Dendron, Vivo, then Alldays. Apparently Alldays was named by a Scottish land surveyor who, to ease his loneliness, imbibed freely of the malted spirits for which his homeland is famous. Every time he awoke from its effects it would be daytime and before nightfall he would again be safe in the arms of Bacchus – thus, all days.

More than half a century ago Jan Smuts travelled this way to the area known as Vhembe-Dongola, roughly between Pontdrif and Weipe on the South African side of the Limpopo. The fascinating landscape must have been what inspired his visionary attempts to lay the foundations for a transfrontier park. It has taken more than 60 years for that dream to come to fruition. Mapungubwe was proclaimed a World Heritage Site in July 2003 and a year later, in September 2004, Mapungubwe National Park, the core of what will eventually be a Transfrontier Conservation Area, was officially opened.

A ceremony imbued with more symbolic meaning had taken place there two months earlier. On a crisp winter’s morning a small group of people gathered near Mapungubwe Hill to witness the release of a white rhino into the park. The reintroduction of this species into the area, where rhino once roamed freely, was the overture to an intriguing subtext. As David Mabunda, CEO of SAN Parks, said that morning, the occasion signified the restoration of Africa’s cultural roots and dignity. He added jokingly that, had it been ecologically sound, they might have painted the rhino gold for this ceremonious event, referring to the famous golden rhino statuette found on Mapungubwe Hill in 1932.

The landscape of Mapungubwe has many stories to tell, some that were written in stone over millions of years, others through human endeavour dating back to the Early Stone Age. Pivotal in this saga was the discovery of the golden rhino and other precious artefacts. In the following year, 1933, a site associated with the Zhizo Pottery tradition (c. AD 700 to 900) on the nearby farm Schroda, as well as a site known as K2, Mapungubwe Hill itself and Bambandyanalo (c. 950 to 1250) on the farm Greefswald, were all proclaimed archaeological sites. These farms and others have since been consolidated into Mapungubwe National Park.

Archaeological findings indicate that Mapungubwe was not just another Iron Age community but a prosperous civilisation that traded in gold, ivory and other commodities with Arabia, India, China and Indonesia. Relics of Chinese Ming porcelain as well as other exotic pottery are indications of the level of trade and wealth during this era.

Archaeologists concur that Mapungubwe was indeed South Africa’s first kingdom, the forerunner of a system of divine kingship that would spread to Great Zimbabwe. The change from egalitarian chiefdoms to a society with distinct class differences coincided with the affluence enjoyed by Mapungubwe’s 5 000strong community between 1220 and 1290.

From the elongated plateau of Mapungubwe Hill, where nature had forged a sandstone citadel, the king ruled over a region that incorporated several villages where subject peoples, such as the Leokwe clan, tended the cattle and practised the art of rainmaking. By 1300, though, probably as a result of environmental pressures, the kingdom had collapsed, causing its inhabitants to migrate north-eastwards to Great Zimbabwe, taking their skills and knowledge with them. Subsequent migrations brought several groups back to Bambanbanayo, in the vicinity of Mapungubwe, and Thulamela, in what is now the Kruger Park.

The gold artefacts that were found on Mapungubwe Hill give us a glimpse into the culture of these people. They were a community that had advanced far beyond the primal needs of the hunter-gatherer, a people whose legacy of beautiful art would intrigue future generations and confirm the significance and dignity of Africa’s cultures.

Guided interpretative tours open visitors’ eyes to the enigma of Mapungubwe. Evidence of habitation abounds on the hill, such as the patterned indentations on a level sandstone rock where youngsters used to play the game of maruba. It is as if the wind still carries their laughter over the Limpopo Valley, a valley where elephant and other game, impala, kudu, waterbuck and eland, seek nourishment during the sparse winter months.

My first heart-stopping encounter with the pachyderms happened at Mapungubwe’s Vhembe Trails Camp when the silence at day’s end was suddenly broken by loud trumpeting, multiplied tenfold as it echoed off the sandstone ridges surrounding the valley. From the safety of my chalet’s deck, camp attendant Gideon and I watched in awe as eight dustkicking, storming bulls animated the scene in front of us. As my camera rapidly ate film, Gideon kept murmuring, “You must write about this, you must write about this.” Well Gideon, I have.