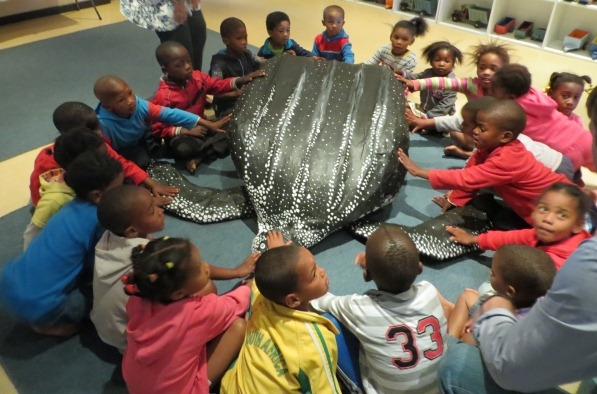 More than 30 children between ages of three and six walked into the room and saw a 2-metre long leatherback turtle lying on the floor. They shouted “Skilpad!, turtle or tortoise in Afrikaans and could not comprehend the sheer size of the creature made out of chicken wire and papier mâché.

Leatherback turtles live in the world’s oceans all the way from Alaska to New Zealand, but the most important nesting sites are located in tropical and subtropical regions. Adults reach a total length of 2 metres, and leatherback turtles can weigh up to 700 kilograms. Every year turtles arrive on the coast of southern Mozambique to lay their eggs.

Milibangalala is the name of one of the Marine Reserve’s communities involved in turtle conservation, monitoring and training to gain their livelihood from tourism instead of collecting the eggs for food. 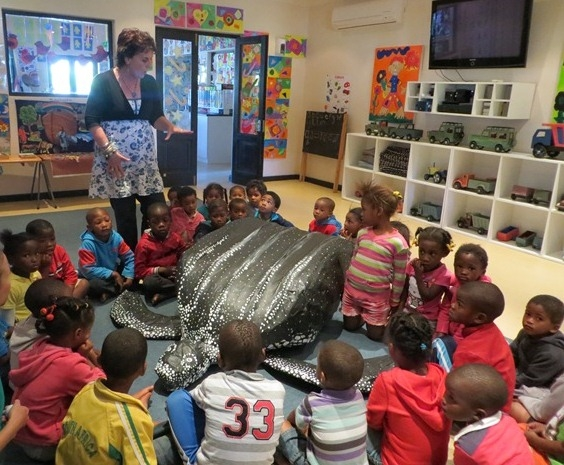 Mrs Althea Hill, head of the Dennegeur crèche, told the turtle story to the children: how they arrive on the beaches to lay their eggs and how they use their huge fins to swim in the ocean currents. In a flash, all 30 children used their arms as fins and swam in the air – just like turtles do.

Mrs Hill also explained to the children that turtles eat jellyfish. As lots of plastic ends up in the oceans, many turtles die as they believe the transparent and glowing plastic bags to be jellyfish. The children’s jaws dropped when Mrs Hill pointed out that the turtle in front of them was life-sized.

The papier mâché turtle was built by the Peace Parks Foundation Fund Development team for a fundraising event in Franschhoek at the end of November, following which it was donated it to the day-care centre to increase the children’s awareness of turtles.