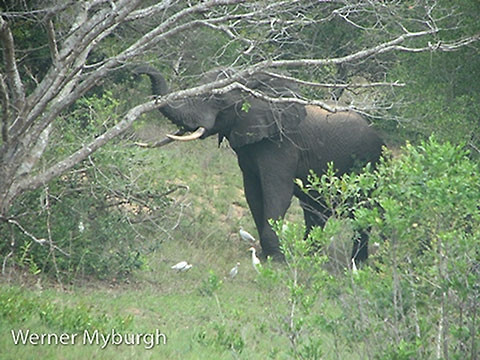 One of the issues being discussed at yesterday’s indaba between senior personnel from Ezemvelo KZN Wildlife and members of the local communities, was when the fences would be dropped between Ndumo Game Reserve and the adjoining Usuthu Gorge Community Conservation Area.

If everyone gets their act together in the area, it could see a mega Community Conservation Area being established, ultimately linking Tembe Elephant Park with smaller community reserves such as Tshanini and Bekula.

Eventually these will all fall within the Transfrontier Park linking South Africa with Swaziland and Mozambique.

During a visit to the Usuthu Gorge this week, the Sunday Tribune found bedrock enthusiasm, and communities working together to make their dream come true.

The project manager, Amon Sithole, who is employed by the Wildlands Conservation Trust, which is working with communities in this regard, was sick.

But Samuel Mdlalose, a member of the Mathenjwa community, the owners of the Usuthu Gorge CCA, who guides tourists to the area, was able to explain the community’s thinking.

Further evidence of this close co-operation between communities, was the project manager for the Tshanini CCA, Amos Tembe (also a Wildlands Conservation Trust employee).

Tembe said he sees his task as facilitating communal contact, helping iron out problems but, at the same time, ensuring that no community feels another is imposing its will on them. He is certainly enthusiastic.

The same applies to Mdlalose, whose pride was evident as he told how they were even influencing people on the Mozambique side of the river. “Many people regularly use the road which passes through our area to come shopping in Ndumo,” said Mdlalose. “At first they were angry, thinking we would not let them use the road any more. But we explained that we would never interfere in community matters of others. We would still allow them to use the road, as this was a community issue, but wanted them to understand that the fences going up were because we were now involved in conservation.”

Members of the community are already being trained as field rangers, learning conservation management skills such as dealing with soil erosion, tracking poachers and identifying plants, birds and trees.

Tembe explained that another neighbouring community had initially been reluctant to form part of the Mathenjwa people’s drive to link with the state-owned Ndumo Game Reserve.

Having seen how the Mathenjwas were taking charge of their own affairs, and were not having things forced on them, they too had indicated they were ready to come on board, said Tembe.

This could mean realigning some of the fences.

Which brought us to the issue of the fence, which the Mathenjwa people having been erecting along their western border – prior to the dropping of the fences with Ndumo.

Members of KZN Heritage had spoken with awe of this fence, and on seeing it for ourselves we had been impressed by the amount of work that had gone into its erection.

Fully expecting to see a fence crossing a plain, we were amazed to see that it marched 40km, much of it up and down steep hills, and through dense vegetation.

Clearly this had been no mean feat, especially as it had been completed within just six months.

Roelie Kloppers, the Project Co-ordinator for the Lubombo Tranfrontier Conservation Area, said they had had an incredible working relationship with the Mathenjwa people, especially since their land claim had been settled.

“Things have come together so well, we hope to drop the fence with Ndumo in November,” he said.

A researcher, Oscar Osberg, who is monitoring lion and elephant in the park, said elephant exclosure was being practised.

“This means elephant are being excluded from a small section of the sand forest, to monitor how the forest rehabilitates itself in their absence,” said Osberg.

A project involving the tiny suni antelope is planned, and there is ongoing research into geomorphology – looking at the interaction between Earth’s soils and the impact of plants and animals.

Freedom in the wilderness