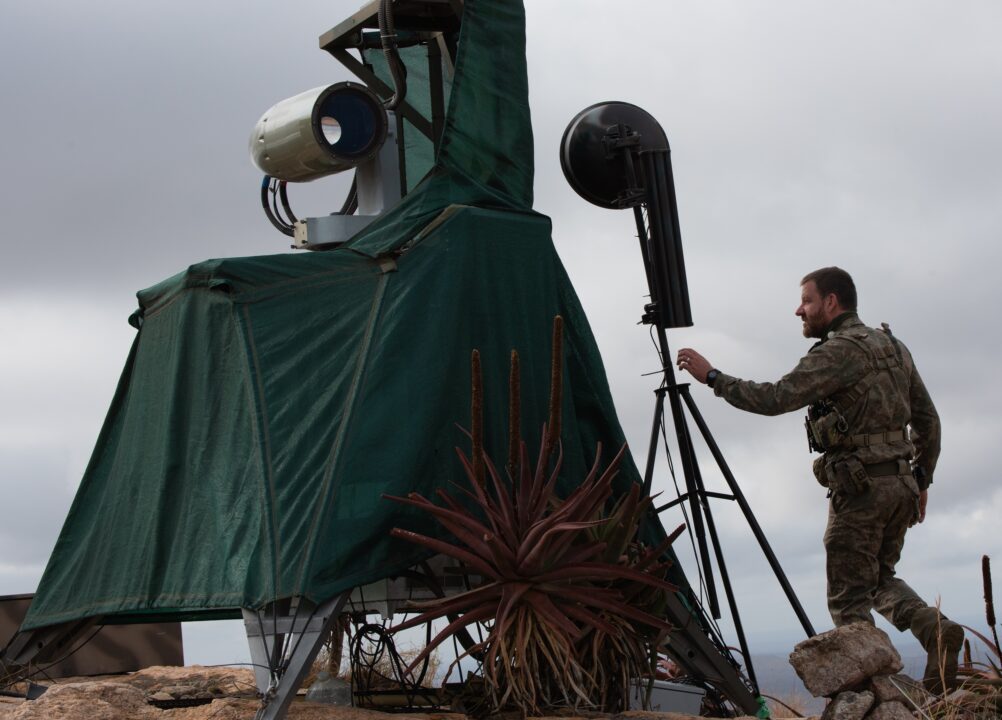 For almost five years, Postcode Meerkat – the most advanced wide-area surveillance system ever developed for counter-poaching purposes on the African continent – has kept an eagle eye over vast sections of wilderness in South Africa’s world-famous Kruger National Park, becoming a key piece in a much larger puzzle that protects one of the last remaining strongholds of wild rhino in the world.

Postcode Meerkat is the product of a groundbreaking partnership between South African National Parks (SANParks), Peace Parks Foundation and South Africa’s Council for Scientific and Industrial Research (CSIR). Its name is given in recognition of the UK People’s Postcode Lottery, the Dutch Postcode Lottery and the Swedish Postcode Lottery, which all contributed towards the research, development and deployment of the system.

Utilising a pioneering combination of radars and electro-optical technology, the astounding capabilities of Postcode Meerkat have been a major force multiplier for counter-poaching teams, in some instances virtually eliminating rhino poaching incidents altogether in the high-risk areas where the portable system is deployed.

In one of the regions where Meerkat is currently installed, gunshots previously rang out constantly, with an average of two to three poaching-related incidents occurring every day. Over the past 12 months, however, just one rhino has been poached in the area. Overall, more than 95% of poacher activity in Meerkat’s deployment areas has been detected, 65% of suspected poachers were arrested and 80% of rhino poaching incidents were disrupted. Rangers have also noticed an increase in the number of rhinos within these hotspot areas.

The modern-day rhino poaching crisis in South Africa started in 2008, driven by high demand for rhino horn in Asian countries. The horn (made of keratin, the same substance as human hair and nails) is used in traditional Chinese Medicine and has also become a status symbol of wealth and prosperity.

The crisis peaked in 2014, when 1 215 rhino were killed by poachers, most of which were in Kruger. Since then, thanks to the dedication of passionate conservationists, intensified protection efforts, increased donor funding, and the development of technology such as Postcode Meerkat, the number of rhinos poached has dropped year-on-year, with 394 killed in South Africa in 2020.

Kruger is the largest national park in South Africa, stretching for 380 km from south to north and covering almost 20 000 km2— an area almost as big as the country of Israel. This poses significant challenges for the park’s counter-poaching units, particularly when it comes to responding quickly to incidents. But the technology used by Postcode Meerkat can detect the movement of both humans and rhinos over large distances, pinpointing their locations and operating during day and night. This allows for dramatically faster reaction times, with counter-poaching teams able to react to poachers before they can target any rhinos.

“Meerkat has been an invaluable force multiplier for counter-poaching, allowing for the immediate deployment of rangers to incidents in areas which have been identified as rhino poaching hotspots,” explains Mark McGill, Technology Operations Manager for the Kruger National Park. “The system has had a massive impact in reducing poaching within specific deployment areas, resulting in more arrests and acting as a deterrent for poachers.”

McGill stresses the need to continue enhancing security, in order to protect larger areas of the two million hectare park.

“Although the Meerkat is proving to be very efficient in addressing poaching in key areas within Kruger, given the sheer size of the park, many areas remain exposed. The dream is to have more Meerkat systems combined with other ongoing initiatives to eventually enhance security across as much of the park as possible.”

Technologies such as wide-area surveillance systems are one important component of the much wider counter-poaching effort in Kruger, which includes rangers on the ground, tracking dogs, helicopters, fixed-wing aircraft and technologies such as camera traps and thermal imaging.

Cathy Dreyer, Kruger National Park’s Head Ranger: Ranger Services, points out that Postcode Meerkat has the ability to overcome most of the limitations that counter-poaching units face on the ground.

Counter-poaching units have to deal with extreme temperatures, rough terrain and the constant threat of being confronted by potentially dangerous game, often during the night. Postcode Meerkat overcomes all of these limitations.

With its superior detection capabilities, the system also allows rangers to plan for what they may face during an operation.

“Postcode Meerkat can provide a clear picture of the number of people who have been detected in an area, and even what they are carrying, such as firearms. Armed with such detailed information, ranger teams can more effectively and safely plan and carry out an operation,” says Dreyer.

Charl Petzer, Programme Manager for Integrated Security at the CSIR, explains how the organisation developed the system from scratch, in under a year: “When we were contracted by SANParks in 2016, we could find no suitable sensors in either local or international markets. So we used our expertise in the surveillance sector to develop something completely unique in under a year, that has effectively classified poaching threats and been successfully integrated into the overall counter-poaching strategy.”

The bigger picture of rhino protection

Postcode Meerkat is one of the projects that falls under the umbrella of Peace Parks’ multi-faceted Rhino Protection Programme. Funding for the programme has been provided by the Dutch, Swedish and UK Postcode Lotteries, along with other donors.

Through the Rhino Protection Programme, we work closely with governments and conservation agencies such as SANParks, Ezemvelo KZN Wildlife and Mozambique’s National Administration for Conservation Areas (ANAC), to develop and implement practical solutions for the protection of rhinos and build up investigative capabilities to reduce wildlife crime.

As part of the protection programme, Peace Parks has worked across the border to help secure the adjoining Limpopo National Park through a long-term partnership with ANAC, fostering cross-border collaboration between South Africa and Mozambique that has further helped to reduce rhino poaching incidents in these core components of the Great Limpopo Transfrontier Conservation Area.

Peace Parks Foundation CEO Werner Myburgh points out that this partnership has contributed significantly towards driving a 76% reduction in poaching incursions between Limpopo National Park and Kruger National Park, over the period 2018 to 2020.

Myburgh adds that the support of donors such as the Postcode Lotteries is critical to continue driving the development of innovative technologies such as the Meerkat.

Rhino conservation is incredibly complex, and if it is to be successful, we constantly need to stay ahead of the technological curve. Peace Parks continues to be extremely grateful for the support that the Postcode Lotteries have given us over the years to make this possible, developing innovative solutions and supporting a much broader multi-faceted strategy.

Rickard Sjöberg, Ambassador for the Swedish Postcode Lottery, highlights that the lottery and its players believe in the power of backing the work of non-profit organisations such as Peace Parks.

“This particular project is beautiful, as it shows the power of collaboration between new technology and human heart and dedication. We want our money and the support of our players to contribute to a better world for humans, animals and the environment, and this project ticks all boxes.”

Through the sustained support of the Postcode Lotteries and other donors, Peace Parks has become the largest financial contributor towards rhino protection in Kruger National Park and Limpopo National Park. Since 2015, the Foundation has provided equipment, training, technology development, capacity building, infrastructure forensics, investigations, rhino management, and rhino orphan care and rehabilitation, along with key strategic and technical advice.

“As a keystones species, rhino play a vital role in maintaining an ecological equilibrium in these landscapes.” says Dorine Manson, Managing Director of the Dutch Postcode Lottery.  “We want to thank our loyal participants for making it possible for the Postcode Lottery to assist Peace Parks and their partners to protect these prehistoric giants through the Dream Fund Rhino Protection Programme that brought about innovative counter-poaching solutions such as the Postcode Meerkat.”