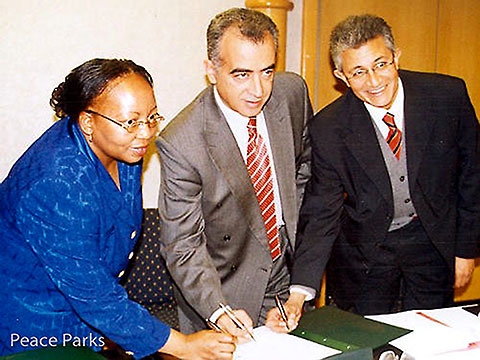 The Maloti-Drakensberg TFCA was blessed with probably one of the best winter months since 1981. Although we sympathize with farmers in both Lesotho and South Africa who lost some animals to the cold, the snow of 2002 is a natural gift to our region and builds the very important water bank in our wetlands.

The main news for July is the signing of the Grant Agreement with the World Bank on 26 July 2002, and we would like to report on that and other activities of the month.

Signing of the Grant Agreement

A total amount of US$7,625 million was allocated to Lesotho for the implementation of the Maloti-Drakensberg Transfrontier and Development Project. This money is provided as a grant from the Global Environmental Facility and the World Bank will manage the project. The bilateral agreement between Lesotho and South Africa regarding Transfrontier Conservation, allows for cooperation across the border of the countries and the World Bank invited both governments to sign the Grant Agreement at the Johannesburg International Airport Holiday Inn on 26 July 2002.

Appointment of Coordinators and Members of the Project Coordination Units

During the last month, the positions of coordinator, accountant and procurement officer in Lesotho have been advertised and the selection process will commence shortly. These posts have been advertised in South Africa during early 2002 and the appointment of the successful candidates will be announced soon.

It is very important to realize that the Maloti-Drakensberg Transfrontier and Conservation Development Area is only one of several projects in this part of Lesotho. Other Tourism Development Projects related to the development of this Transfrontier region includes:

During July 2002, the Maloti-Drakensberg Transfrontier Conservation and Development Project entered the final phase of reaching the Conditions for Effectiveness, set by the World Bank. It is now up to the people, chosen to run with this project, to make a success.