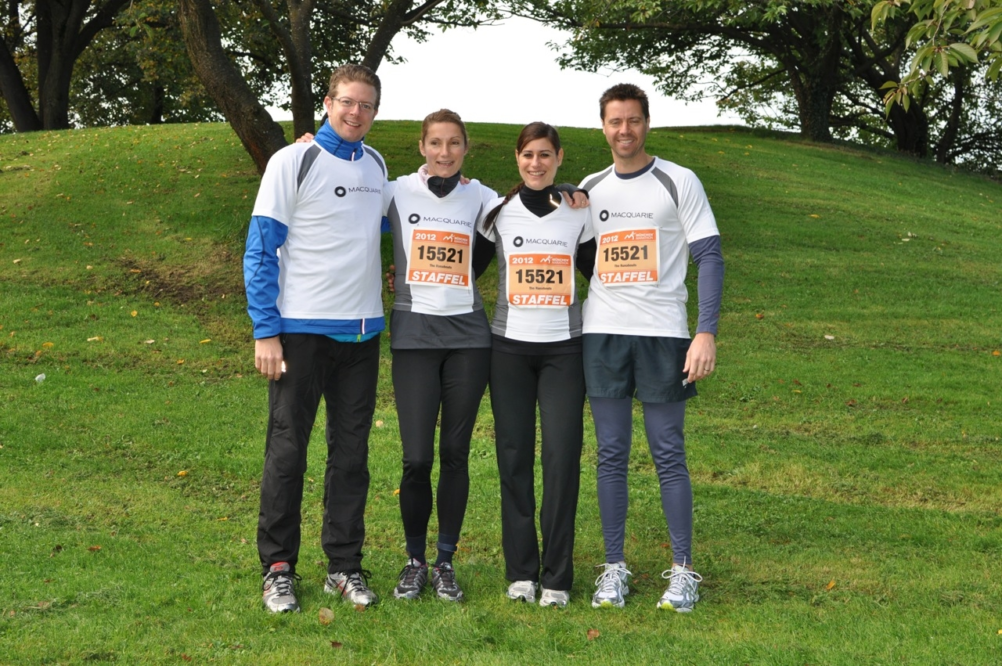 On 14 October 2012, an enthusiastic group of runners from the *Macquarie Group in Munich, Germany raised awareness of, and funding for Peace Parks Foundation.

“The German office of the Macquarie Bank International Ltd in Munich relocated, and the Macquarie Art Committee kindly loaned, art from its collection for the new office,” says the Macquarie Munich Office Head Philipp Graf.

“The team responsible for Macquarie Bank in Germany wanted to return the favour by fundraising for a charitable institution and obtained the support of the **Macquarie Group Foundation, the charitable arm of the global provider of financial services.”

As a member of the Peace Parks Club, Mr Graf suggested that the four-member team participate in the Munich Marathon Team Relay in support of Peace Parks Foundation’s goals, thanks to its proven record of protecting wildlife and communities in the southern African transfrontier conservation areas.

“As the Macquarie Munich staff are keen runners, it seemed a fitting project to raise funds for”, says Mr Graf. The distances for the four runners of the relay team were:

The team regularly goes for lunch-time runs in the English Garden in the centre of Munich. This is the largest park in Munich and one of the largest public parks in Europe, so they were well prepared.

“The run was great fun for all of us as the weather was pleasant and the atmosphere created by the organisers motivated all participants. Every two to three kilometres there was a band playing music for the runners and lots of people cheering all the way to the finish line at the Olympic Stadium in Munich. A great day for all participants.”

Gold rhino © University of Pretoria Department of UP Arts Mapungubwe Museum
The initiative was very well received and other colleagues donated money as well. The team raised €2 291 through the Givengain online charity platform and the Macquarie Group Foundation matched the funding for a grand total of €4 582!

As requested by the Marathon Team, the funds will be directed to the Greater Mapungubwe Transfrontier Conservation Area, which spans the borders of Botswana, South Africa and Zimbabwe. In addition to its magnificent landscapes and extraordinary wildlife, it also has a World Heritage Site at its core, where archaeologists had excavated the famous gold rhino and other evidence of a wealthy African kingdom. A prosperous civilization inhabited the area between 900 and 1270 AD and traded with places like Egypt, India and China.

The Macquarie Bank’s Munich office staff plan to do more fundraising to benefit Peace Parks Foundation, along with other charities and any money raised will be matched by the Macquarie Group Foundation.

**The Macquarie Group Foundation is one of Australia’s oldest and largest corporate benefactors. It supports programmes in Europe, the Americas, Africa, Asia and Australasia. Together with Macquarie staff, the Foundation has contributed more than AUD165 million to approximately 1 300 community organisations since 1985. In addition, Macquarie’s staff provide many hours of support to non-profit organisations in a volunteer, pro bono, board and executive capacity.