Listen to the silence 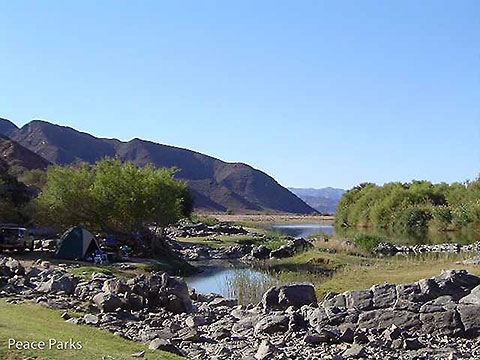 Have wheels, will travel, says STEVE MOSELEY as he roams the seemingly barren, but not quite spiderless, Richtersveld.

A few stars were still managing to withstand the extinguishing effects of the rising sun when we crawled from our tent, barefoot, onto the cool, soft sand. Rattling through the ammo boxes in the back of the 4×4, mugs, teaspoons and coffee were retrieved and arranged on the table while new life was huffed into the embers of last night’s fire.

In no time at all, the billy was set amid the softly popping kindling and we reclined in our chairs. Down at the river a Goliath heron, knee deep in the rushing rapids, waited patiently, like a patron at a fast-food fish counter, for an easy meal. Steam lifted the aroma of the freshly poured coffee into the morning air and each sip dispersed the last puffs of drowsiness.

It was the same brew we always made back home, but out here it just tasted so much better: it seemed to have more life.

Maybe it was the view along the gliding Orange River, the stark beauty of the Richtersveld’s mountain scenery, or the fresh, silent start to a new day. I tossed the dregs into the fire and poured myself a refill.

Not another human being was visible, not a single unnatural sound was audible, and such a scarce moment was worth savouring.

For visitors to the !Ai!Ais Richtersveld Transfrontier Park, the largest mountain desert park in Southern Africa, mornings like this are one of the reasons to be here. There was none of the crowds and frenetic ablution rush experienced in more popular resorts.

No radios, engines or voices were there to disturb the peace – just primeval silence. We had arrived the previous day and set up camp in the shade of a gnarled thorn tree at De Hoop and, compared with the previous morning’s biting frost in Springbok, our welcome here was comfortingly warm.

Having booked for four nights, we opted for a mix of camping and a little comfort at the newly opened wilderness camps at Tatasberg on the river, and Gannakouriep in the mountains. The Richtersveld used to be a no-maintenance park without facilities, but along with the wilderness camps the campsites along the river have been upgraded and now have cold showers, basins, sinks and toilets. Although, understandably, visitors must still carry out their own rubbish.

Getting to the park was an adventure in itself. On the gravel road from Alexander Bay, the signage directing visitors was not as clear as expected so care had to be taken to follow a map and watch out for the turnoff to Sendelingsdrif. The mining areas we drove through were also a little disorienting, but just as we were convinced we’d wandered into a restricted area a boom appeared and just beyond that lay the park HQ sporting its 10 new self-catering chalets.

The formalities at the gate were quick and easy A top-up of diesel, a few last questions, and – what most people forget after booking through National Parks head office – the payment of the conservation levy before you can proceed further. According to new park manager, Andy Davies, the !Ai !Ais Richtersveld Transfrontier Park is regarded as a seasonal destination, visited mostly in the cooler months of the year, but it shouldn`t necessarily be so.

Well, I suppose that depends on how much you like the heat as temperatures can reach 50?C on the odd occasion. But with aircon in the vehicle, plenty of shade trees under which to pitch your tent along the river, the wilderness camps, and distances between campsites that are easily driven in a few hours, it could be possible to enjoy the park at virtually any time of year.

The park boasts 200 km of track, and sticking to these fixed trails is important, as this is an eco-sensitive area. Many of the trails follow dry riverbeds, winding between rocks and through soft sandy patches.

Should the area experience enough rain to bring a trickle of water through the river courses, this could add a new dimension to driving through the park, but with an average rainfall of only 50 mm a year you would be very lucky to have the opportunity.

Contrary to what we believed, it’s not necessary to own a 4×4 to reach most of the park, but that does not mean the tracks are suitable for the standard family car.

According to Andy, a 4×2 will mostly take you to where you want to go except between the riverside camps of De Hoop and Richtersberg and on to the wilderness camp at Tatasberg.

I was a bit sceptical about this until we met a party of four 4×2 bakkies at Kokerboomkloof Campsite, and they confidently told us they only engaged diff-lock on a couple of occasions during their journey across the park. But good ground clearance is a must.

Big chunky tyres are also a must – none of those low-profile street tyres and wafer-thin spare wheels aswell as a little experience for the rougher and steeper areas.

After entering the park it wasn’t long before we were tumbling out of me vehicle and filling our lenses with the iconic hatfmens (Pachypodium namaquanum), evident on the rocky slopes flanking tbe track. Together with the flowering succulents, brought to life by tbe recently departed winter ralris, they turned the area into a paradise of droughtresistant colour that thinned to more barren, shattered rock the deeper into the park we drove.

En route from De Hoop to Tatasberg, while meandering through some koppies, we crested a rise between two rock buttresses and a valley fell away before us. So unexpected was the sight that it literally took our breath away, the palomino-coloured sands below us flowing to a distant mass of peaked ridges.

We then entered a gorge leading back towards the Orange River, expanding and narrowing as it wound its way through the mountains. Along me river, deep sand was the probable reason vehicles with lesser capabilities than a 4×4 would struggle to make headway As we clawed our way along, revs high and wheels spitting puffs of dust into the air, a pair of fish eagles drifted in the big blue, singing their anthem to Africa.
Tatasberg Wilderness Camp

Tatasberg wilderness camp lies 3,2km past the established Richtersberg campsite, along a track that winds between stands of riverine scrub where sightings of francolin and little bee-eaters were common. Piling hardwood logs into the braai, strategically placed at the front end of the deck, we popped a couple of Charles Glass`s best and sat back to watch the sun sink beyond the distant ridges. As the sun disappeared below the peaks, the waters turned to liquid silver, slowly fading into the night, before reappearing faint and mysterious with the rising of a new moon.

Paraffin lamps provided a subdued glow more fitting to the scene than the harsh white of electric light. When the coals glowed like the surrounding peaks at sunset, we took part in one of the great cooking traditions of our country and then sat back, bellies full, just listening to the silence.

The following day, feeling sorry that we hadn’t booked at least one more night at Tatasberg, we made our way across the shimmering open landscape of the Spring bokvlakte on a track faster than those of the previous day but with long stretches of corrugations.

A scorpion (Parabuthus villosus) wandered across our path seemingly unperturbed by our presence. The area is one of South Africa’s scorpion hot spots but this doesn’t mean you’ll be ambushed around every rock, although you`re advised to keep your shoes on while outdoors on warm summer nights.

Kokerboomkloof Campsite is, in a way, similar to Spitzkoppe in Namibia, albeit on a much smaller scale. Huge rock boulders and domes are interspersed with quiver trees seemingly frozen in time, and being away from the river created a feeling of even greater isolation.

Though we had only just arrived, within minutes several tame birds were hopping round our feet having presumably learnt that campsite activity is a potential food source in this land of meagre pickings.

The two very good viewpoints near Kokerboomkloof kept us engrossed for half a day. From the first, as we looked over the Springbokvlakte, the sands of this vast plain looked like mist as they engulfed the base of the darker koppies and ridges dotted below.

At the second, we virtually drove to the edge of a rock ledge from where the landscape fell away into an isolated basin. Soft rock scoured and sculpted by wind offered hours of wonderment, and high up a hollow at the base of a massive boulder led to a shallow cave from where we had a framed view of the surroundings.

Our last night was at Gannakouriep Wilderness Camp, which proved a difficult place to find when approaching from the west. Once off the main route and with meandering tracks aplenty, we ended up exploring much more of the mountains than intended before we happened on the camp.

Here there is no river to distract your attention from the raw, rugged beauty and utter silence. Again the camp comprises four chalets with the same basic comforts of Tatasberg, but here they are built of rock and canvas, enabling them to blend into the surroundings without being obtrusive. Out front, a rock patio has a sunken fire pit around which to sit and conjure up fireside stories of your own.

The wilderness camps are a perfect place to relax with binoculars and feel the stress of the modern world melt away Take a walk in search of the incredible variety of succulents – 30 percent of all South Africa`s succulent species survive here – in all shapes and sizes.

We took a walk on the dead flat surface of Springbokvlakte where the silk entrances to the lair of the buckspoor spider could be seen. While crouching for a closer look, a fast approaching object caught the corner of our vision and before we knew it, a solifugid – more commonly referred to as a sunspider or wind scorpion – came running into our shadows with the speed of a runaway train. It appeared so quickly and unexpectedly across the seemingly lifeless plains that we all did a jitterbug version of the moonwalk before it took fright and sped for cover in the shade of the vehicle.

Soon this mountain desert experience is set to get even better, with a pontoon across the Orange River at Sendelingsdrif that will enable visitors from SA to access the Namibian side and vice versa. This will link the 1625 sqkm area of Richtersveld to a 4 420 sq km area in Namibia making up 6 045 sq km of wilderness in which to roam.