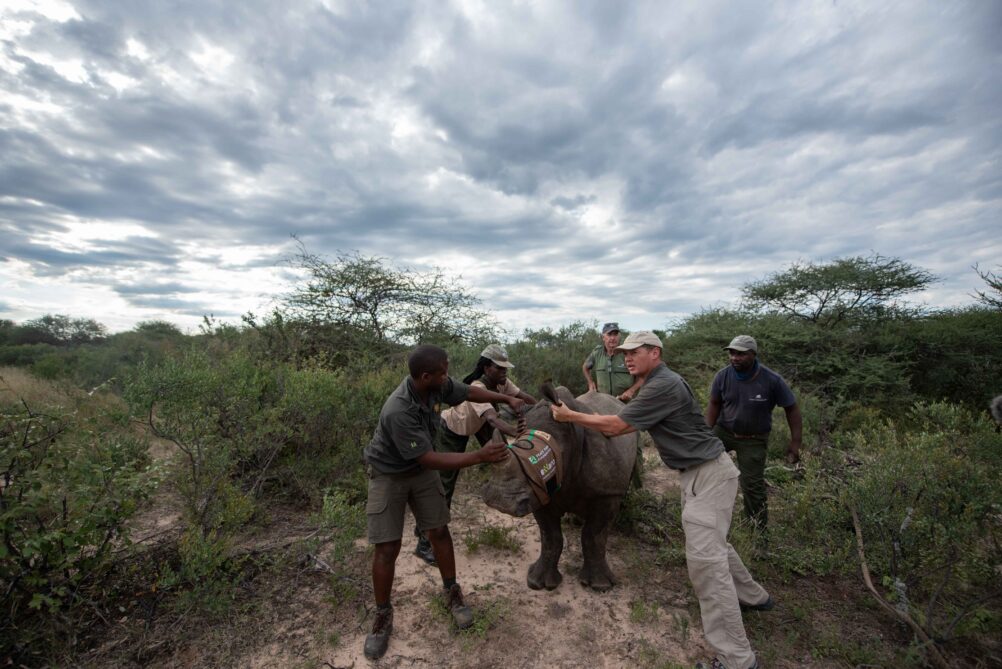 The Governments of Mozambique and South Africa are pleased to announce the planned reintroduction of rhinos to Zinave National Park in 2022. After becoming locally extinct more than 40 years ago, diversified resources company, Exxaro Resources, and southern African NGO, Peace Parks Foundation, is spearheading a project to reintroduce both the critically endangered black rhino and the near threatened white rhino to the park. Zinave, which is co-managed between Mozambique’s National Administration for Conservation Areas (ANAC) and Peace Parks, will not only host the first founder population of both rhino species in a national park in Mozambique, but is also set to become the first “big five” national park in the country.

Sign up to get breaking rhino translocation news first!

In 2002, the Governments of Mozambique, South Africa and Zimbabwe entered into a Treaty to establish the Great Limpopo Transfrontier Conservation Area, spanning over 100 000 km2 and incorporating five national parks, including the iconic Kruger National Park. Now, 20 years later, it is fitting to celebrate two decades of continued rewilding and restoration of this globally important cross-border conservation landscape with the introduction of these keystone species. 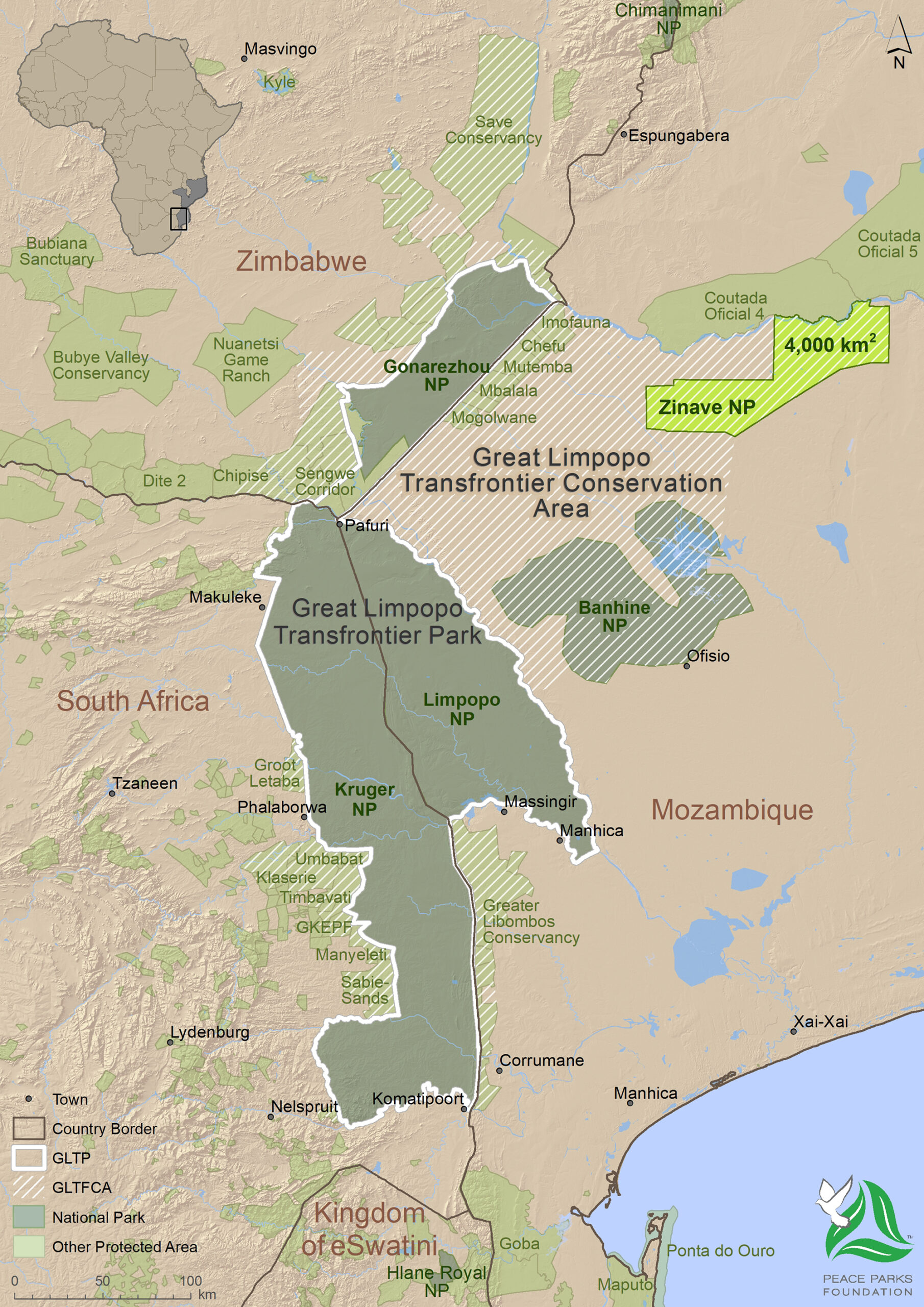 Since 2016, through the long-term co-management agreement between ANAC and Peace Parks, an intensive rewilding programme has reintroduced more than 2 300 game animals representing 14 different species into Zinave National Park. This has included rewilding the park with buffalo, elephant and leopard. In September last year, the first lions were also recorded in Zinave after a 40-year absence. It is assumed that the lions are migrating from one of the other parks within the transfrontier conservation area: a good indicator that nature is returning to health, and affirming yet again the vital role of connectivity between safe havens within a conservation landscape.

After a careful evaluation process by Exxaro Resources, that included in-depth feasibility studies of potential recipient sites, the Governments of Mozambique and South Africa approved the reintroduction of more than 40 white and black rhinos to a specially constructed, 186 km2, high security sanctuary within the 4 000 km2 Zinave National Park. The rhinos, that will be translocated to Zinave over a period of one to two years, are being donated by Exxaro Resources — a longstanding donor and supporter of conservation and a Club 21 member of Peace Parks.  Previously, in 2014, Exxaro Resources relocated 10 white rhinos to Botswana to bolster an existing small population, amongst its other biodiversity practice activities.

South Africa’s Department of Forestry, Fisheries and the Environment (DFFE), the Mozambique Ministry of Land and the Environment, and Exxaro Resources, with additional funding provided by the German Postcode Lottery and MAVA Foundation, are joining hands with ANAC and Peace Parks for the translocation.

“Establishment, management and relocation of wildlife species are all being done as part of Exxaro’s responsibility to these species — particularly where they are of special conservation concern,” said Mr Mxolisi Mgojo, CEO of Exxaro Resources.

“Responsible environmental stewardship is about protecting and preserving natural resources for the greater good of all our stakeholders. Water scarcity, air pollution, biodiversity threats, hazardous waste, and climate change all pose significant environmental and financial risks that we need to manage while delivering on other business objectives. Biodiversity loss has been identified as being at significant risk in the context of climate change.

“Considering this, Exxaro has been implementing several projects to ensure that its mines coexist in harmony with the natural environment. These include an Alien Invader Eradication Programme, a Wetland Rehabilitation Project, and Biodiversity Relocation Programmes. These initiatives and programmes aim to protect indigenous flora and fauna species and support local ecosystems,” Mgojo added.

Rhino populations have plummeted in all nine remaining rhino range states in Africa since 2008 with over
8 000 animals being killed for their horns in South Africa alone. The horns are prized for mythical medicinal properties and as a symbol of status in some Asian countries. To counter this, an intensive campaign has been launched to save the species by increasing protection efforts and relocating rhinos to safe havens where they have a chance to act as founder populations. A rigorous process was embarked upon by Exxaro Resources to identify a suitable site which has the best potential to increase the range of rhinos in the Southern African Development Community region, and facilitate the growth of these populations under strong security measures and good conservation management.

Through donor funding and enhanced management by ANAC and Peace Parks Foundation, supported by Exxaro Resources, security infrastructure and counter-poaching capacities in Zinave’s sanctuary have been strengthened to such an extent that keystone, high-value conservation species are well protected.

“Over the past two decades, we have worked towards the vision of restoring iconic African landscapes in this vast area, by bringing countries together to reinstate wildlife populations and strategically develop protected areas where wildlife and people can co-exist in harmony,” said Mr Werner Myburgh, CEO of Peace Parks Foundation.

“The rewilding of Zinave in partnership with the Government of Mozambique, has been an extraordinary success story. Stepping into the park in 2015, few would have imagined that the decimated wilderness would become a thriving protected area roamed by the big five and thousands of other animals in such a short time span. The project to reintroduce rhinos is especially significant and the culmination of enormous dedication in building relationships with communities, governments, donors and compassionate private sector organisations such as Exxaro Resources.”

Under the co-management agreement, activities over the past five years have included the establishment of a joint park management team, the upgrading of the park management infrastructure, training and appointment of additional rangers, wildlife reintroductions and various community development programmes.

To further ensure the safety of the rhinos, significant investment is being channelled into additional protection efforts. This includes the recruitment of 32 additional rangers who will undergo specialist training on rhino protection, bringing the number of rangers deployed in the sanctuary and surrounding areas to 72. A further 20 sanctuary guards will also be deployed for first-line detection of incursions.  A helicopter and fixed-wing aircraft – integrated into a rapid response unit – have been secured to boost surveillance and counter-poaching reaction capabilities, while all operations will be coordinated through a dedicated rhino control centre with advanced technology that connects central command seamlessly with those in the field.

“In addition to enhanced counter-poaching strategies, it is generally agreed that one of the best options to stabilise rhino populations is to establish more viable breeding populations in alternative sites where they are safe, with the aim of increasing the overall growth rate of rhinos to exceed the rate of poaching,” said DFFE Minister Ms Barbara Creecy. “After many years of dedicated cross-border collaboration between the governments of South Africa and Mozambique, together with public and private partners and donors, Zinave now provides just such a location, one that has the potential to contribute towards the survival of the species.”

Mozambique’s Minister of Land and the Environment, Ms Ivete Maibaze, added that: “With the host of stringent protection and monitoring measures in place, it is envisioned that this historic translocation will establish a viable breeding population of rhinos in a Mozambique national park for the first time in decades. In addition, conferring Big Five status to the park will be greatly beneficial for the emerging eco-tourism industry of this spectacular wilderness and for the communities around Zinave National Park.”