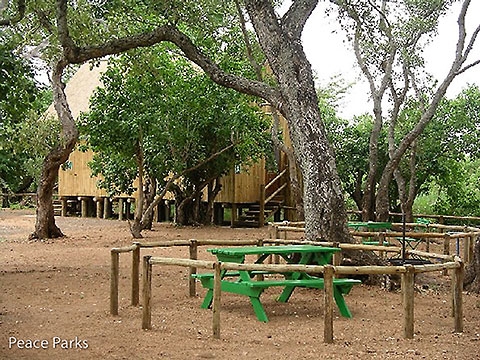 The recent completion of the Makhadzi picnic site near the newly created Girayondo border post in the Kruger National Park (KNP) signalled another significant step towards the final establishment of the Great Limpopo Transfrontier Park.

The new park, comprising the Kruger, Mocambique`s Limpopo National Park and Zimbabwe`s Gonarezhou National Park, will be one of the largest consolidated conservation areas in the world.

The picnic site, situated eighteen km east of the Kruger`s existing Letaba tourist camp, was developed on the spot where a military camp once stood.

It will now serve as a pleasant stopover for travellers wishing to explore the Mocambican section of the newly extended wildlife sanctuary.

Makhadzi has some interesting features.

Exquisitely crafted wooden facilities, plenty of large, shady indigenous trees and an excellent lapa for group meals and refreshments. There is also an information centre exhibiting the history of Steinacker`s Horse, the controversial British regiment which patrolled this section of the country`s eastern frontier at the end of the nineteenth century.

The eccentric Colonel Steinacker and his men apparently caused Colonel James Stevenson-Hamilton, first warden of the KNP endless headaches; it was therefore not surprising that the conservation chief labelled them `a bunch of lay-abouts.

Latest news from the area is that the border post buildings on the South African side have been completed, under the supervision of former senior KNP manager Frans Laubscher.

In addition, accommodation for the border post staff has been constructed at Letaba.