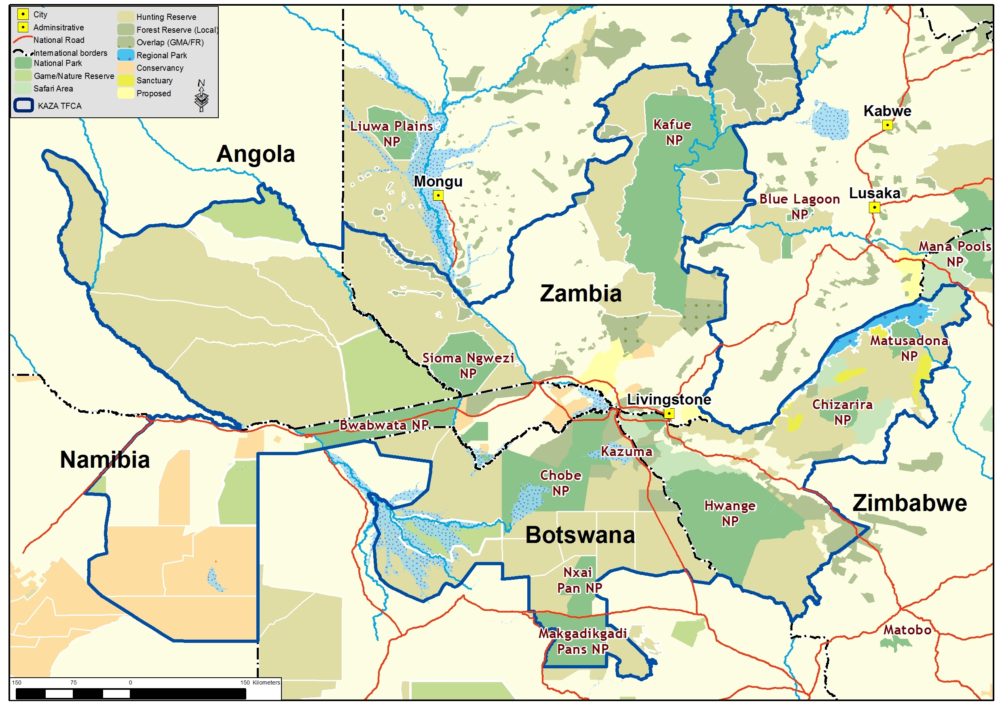 On 18 August 2011 at the SADC Summit in Luanda, Angola, the Presidents of the Republics of Angola, Botswana, Namibia, Zambia and Zimbabwe signed a Treaty which formally and legally establishes the Kavango Zambezi Transfrontier Conservation Area (KAZA TFCA). The surface area of the KAZA TFCA is over 444 000 km2 (similar in size to Sweden) making it the world’s largest conservation area comprising multiple resource use areas including National Parks, Game Reserves, Forest Reserves, Conservancies, Game/Wildlife Management Areas and Communal lands. By signing this Treaty, the five partner states aim to ensure that the natural resources they share across their international boundaries along the Kavango and Zambezi River Basins are conserved and managed prudently for present and future generations within the context of sustainable development. Tourism development in the TFCA will be one vehicle for socio-economic growth in the region, aimed at improving the livelihoods of the primary beneficiaries of this TFCA – the people that live within and around the TFCA who bear the opportunity costs for the biodiversity conservation.

The signing of this Treaty marks a historic and significant milestone in the development of the TFCA, and it affirms the commitment of these five southern African states made in December 2006 when they signed a Memorandum of Understanding to facilitate the negotiations to establish this TFCA. With the signing of the KAZA Treaty, the KAZA TFCA shall become an international organisation with a legal persona, capable of entering into contracts, and acquiring and disposing of property. Institutions established through the Treaty to govern the TFCA, particularly its Secretariat, will be empowered to ensure that the objectives of the Treaty are realized and corresponding strategic plans and protocols implemented.

The KAZA concept was agreed by the five partner states in July 2003 in Katima Mulilo, Namibia, and from that time, the five partner states have led its process of establishment with visionary leadership and sense of partnership. The KAZA vision has received tremendous support from international development partners in particular, the German Government through KfW, Peace Parks Foundation, the Dutch Ministry of Foreign Affairs, the Swiss Agency of Development and Cooperation and the Worldwide Fund for Nature (WWF) who have all been instrumental in getting the TFCA to where it is today.

The signing of the Treaty during the closing ceremony of the SADC Summit in Luanda is a fitting gesture and not without basis as the KAZA TFCA is founded on the SADC ideals articulated in the Protocol on Wildlife Conservation and Law Enforcement of 1999, which commits SADC Member States to “promote the conservation of shared wildlife resources through the establishment of transfrontier conservation areas.”

The KAZA TFCA is characterised by a mosaic of land uses; diversity of cultures, peoples and languages; differing national capacities, priorities and natural resource management practices; biodiversity of global significance; vast geographical extent; immense and in many places untapped tourism potential; and a growing human population with corresponding development needs. These features offer both opportunities and challenges for realizing the KAZA vision. The KAZA Treaty signifies an enabling instrument through which these challenges can be addressed and these potential opportunities maximised.

The KAZA partner states would like to extend their gratitude and appreciation to the local, regional and international stakeholders in their unwavering support of this ambitious and noble conservation and development partnership.

By KAZA Secretariat on behalf of the five KAZA partner countries