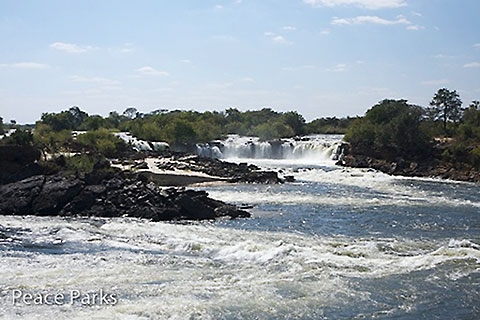 On 7 December 2006 the cornerstone for the world’s biggest conservation area, the Kavango Zambezi Transfrontier Conservation Area (TFCA) was laid with the signing of a memorandum of understanding by the five participating countries to jointly work towards the establishment of the TFCA. The Kavango Zambezi TFCA is situated in the Okavango and Zambezi river basins where the borders of Angola, Botswana, Namibia, Zambia and Zimbabwe converge. It will span an area of approximately 287 132 km², almost the size of Italy (300 979 km²), and will include 36 national parks, game reserves, community conservancies and game management areas.

On 18 and 20 June 2008 the Zambian Integrated Development Plan (IDP), which will ensure the sustainable and equitable development, utilisation and management of the Zambian component of the Kavango Zambezi TFCA, was handed to Mr Michael Kaingu, the Zambian Minister of Tourism, Environment and Natural Resources.

The ceremony on the 18th of June was held at Livingstone where the IDP was presented to the Minister by the communities of the southern province. On 20 June the handing over ceremony was held at Ngonye Falls in the western province. The Litunga of Barotseland, the King of the Lozi people, sent his senior indunas to this function.

The two ceremonies follow on more than a year of comprehensive and participatory planning processes by the Zambia Wildlife Authority (ZAWA), facilitated by Peace Parks Foundation, whereby all affected communities and stakeholders identified their needs and priorities for development. The process became one characterised by high levels of interest and enthusiasm by all, with certain groups walking for four days to hand in their submissions, some including sketches with suggestions of the zoning of their areas.

The IDP document consists of three main chapters: The Place, The People and The Plan. The document highlights 89 action projects that were identified during the integrated planning process, relating broadly to natural resource conservation and use, community development and benefits, and planning and infrastructural requirements.

The IDP development is indicative of Zambia’s political will to develop the Kavango Zambezi TFCA. As is the case with southern Africa’s other TFCA initiatives, the IDP has again been a partnership between government, local communities and the private sector. The IDP process was financed by Peace Parks Foundation, WWF Netherlands and The Rufford Maurice Laing Foundation.

Issued on behalf of the government of Zambia.