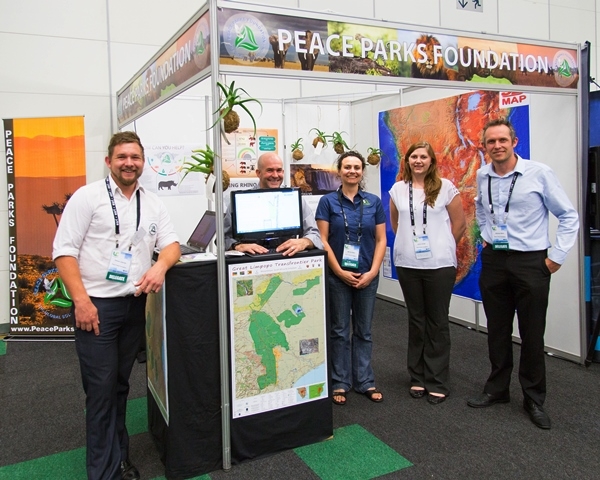 The Information Systems and GIS team at the stand

The first ever Esri Africa User Conference was held at the Cape Town International Convention Centre from 11 – 13 November 2015. The event was attended by 1 200 delegates over the course of the three days. The primary aim of the conference was to unite Geographic Information Systems (GIS) users in Africa. The conference allowed for networking opportunities and the showcasing of the newest software enhancements. The plenary session made mention of Peace Parks Foundation, acknowledging it for Special Achievement in GIS.

The conference saw government, NGO, private sector, academic and student delegates come together from across the continent for three days of sharing their work, enabled by using Esri products, and to attend demonstrations and technical workshops conducted by the Esri team. This offered the opportunity for delegates to network with other Esri users, sharing challenges faced and successes achieved as GIS professionals. With the major advances made in the Internet and its services over the past number of years, much of the focus of the conference was on GIS and web mapping services.

Peace Parks Foundation was kindly offered a stand to showcase its work and much interest was shown by the GIS community. The star attraction of the booth, and the tool used to lure passers-by, was the 3D map of SADC overlaid with the TFCA boundaries. While the map becomes 3D when using ChromaDepth glasses, the quality is not compromised when viewed without. Esri President Jack Dangermond dropped by and requested a photo with the cartographer, as well as a copy of the map. The booth further boasted poster maps, monitors displaying various Peace Parks Foundation videos and online interactive story maps.

The second day of the conference allowed for sectoral conference tracks to be followed. The conservation track was jointly organised by Esri and Peace Parks Foundation. The intention of this track was to bring together data providers and applied GIS users in the conservation sector. Esri used the opportunity to discuss the Open Data Portal together with various other data sets, as well as mechanisms to access these, for those involved in conservation and the environmental sector.

Craig Beech, Peace Parks Foundation’s Information Systems Manager, observed that there is a theme and drive in GIS to move away from “Systems of Records” to that of “Systems of Engagement”, as it was phrased by Jack Dangermond during the opening plenary. This confirms the importance of sharing data and information and not squandering resources on re-doing, re-designing and re-thinking ways in which spatial decision support is offered. He went on: “It is also very exciting to see how business intelligence tools are being completely dovetailed with the Esri suite of products. Without the wonderful support of Esri over the years, Peace Parks Foundation’s work would be less integrated and less visual. This would have made facilitating and assisting countries and agencies with transfrontier conservation development that much more difficult and challenging.”

Peace Parks Foundation deeply appreciated the acknowledgement by Esri and its attendees came away from the conference feeling empowered as a team to continue learning and leveraging the rapidly evolving GIS technology to support the vision and mission of Peace Parks Foundation in new and innovative ways.

Learning The ABC Of Conservation