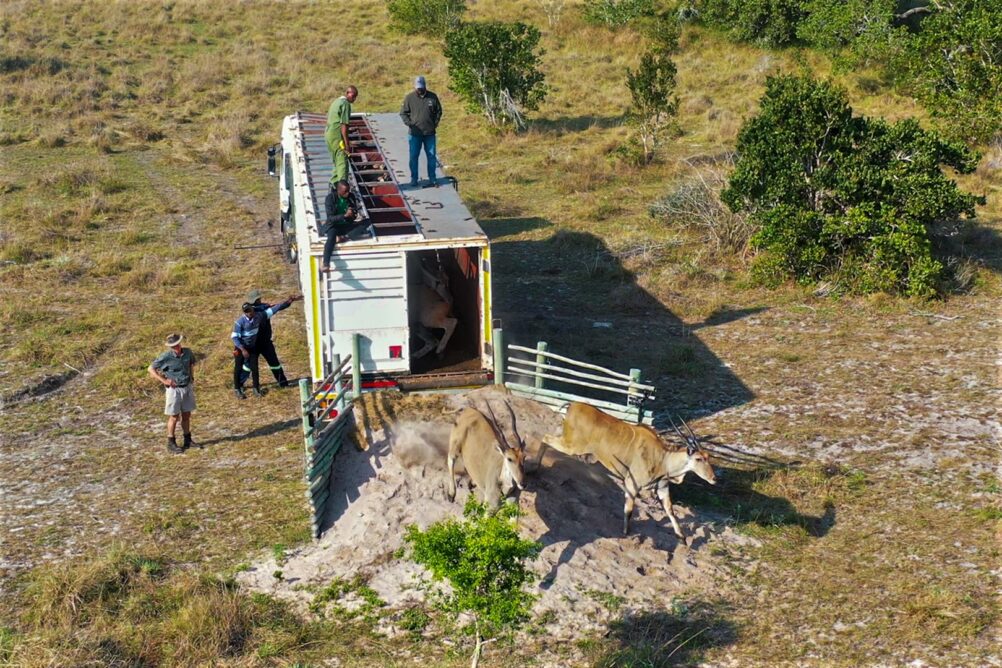 A sixty-nine-strong herd of eland has been successfully translocated to Zinave National Park, Mozambique.

This forms part of a large-scale conservation undertaking by Mozambique’s National Administration for Conservation Areas (ANAC) and Peace Parks Foundation – who are jointly restoring and developing the park under a long-term co-management agreement.  Their extensive rewilding efforts in Zinave have to date seen more than 2 300 mammals from 15 species – with eland now being the 16th – introduced into the park’s well-secured sanctuary, with wildlife now flourishing at around 5 000 animals.

The translocation enacts part of a progressive co-management agreement by Mozambique’s National Administration for Conservation Areas (ANAC) and Peace Parks Foundation to restore and rewild Zinave National Park. This initiative has helped vitally in engineering a turnaround in Mozambique’s conservation status; protected areas now cover one quarter of the country’s landscape.

Such a robust incoming eland population, extremely well-suited to Zinave’s varied and habitat-rich landscape, is expected not only to adjust easily but also to grow swiftly in numbers, making them a valuable and adaptable addition.

Restoring a conservation area’s ecosystem is one of the key components to rebuilding a national park, alongside factors such as infrastructure and tourism development to ensure long-term sustainability. Tourism is vital to Zinave, particularly in the role that it fulfils in building and bringing livelihood opportunities to local communities. This includes being directly impacted by a 20% share in park revenue, increased employment prospects in the conservation or hospitality industries, and benefiting from the knock-on effect of regional economic growth spurred on by eco-tourism.

Eland, the second largest antelope species in Africa, will hold great appeal in Zinave for plains game viewing, as well as fulfilling a crucial and distinct ecosystem role.

Eland will be a signature species and a strong game viewing draw increasing Zinave’s attractiveness to both local and international visitors. The presence they command in Zinave is as impressive as it is ecologically significant; eland play a vital role in the ecosystem and yet as a species have become marginalised across their native landscapes. Unlike several endangered animal introductions to Zinave, eland do not appear on the IUCN red list of threatened species. However, they have been eliminated from significant expanses of their historic range as human encroachment and land fragmentation have impacted the spacious ranges and food sources they depend upon.

Since the 1970s, their population – along with the numbers of various other species – decreased dramatically due to destructive human impacts in various southern African countries, including Mozambique. There has since been a turnaround with an emphasis placed on the safeguarding and development of protected areas, which, impressively, now cover one quarter of the country’s landscape.

The health and sustainability of Zinave’s ecosystems, and the biodiversity these able to support, is dependent on wildlife of all kinds – from the Big Five to lesser known but integral species.

Encouraging and enhancing biodiversity is not just contingent on the Big Five icons or keystone species most conspicuous in the landscape. Being able to observe the great shifts brought about by many other species – which necessarily include eland, amongst other antelopes and herbivores – is a vital reminder that wildlife of all kinds contributes to the health and sustainability of wilderness areas. Naturally, this extends to the impact rewilding can have on mitigating climate change.

Historically, the transient and shy eland would’ve occurred in Zinave in stable populations, but they have rarely been seen, missing as it were from the landscape apart from the odd individual or small group.

With a nomadic and far-wandering species such as Eland, it is unlikely that they ever went extinct in Zinave, as such. “Currently there are no resident populations to speak of, so the intention now is to bring back a breeding population – needing a good core population starting off – to be released initially into the sanctuary, and then into Zinave’s greater open spaces over time.

Transferred carefully by translocation logistics service provider, Conservation Solutions, in multiple loads along an approximately 450 km journey by road, the 69 eland were moved from Santuario Bravio de Vilanculos (Vilanculos Coastal Wildlife Sanctuary) at the tip of the San Sebastian Peninsula where good conservation management has seen the local eland population exceed the area’s ideal capacity.  Their safe arrival in Zinave merits yet another rewilding celebration, following on from the two most recent translocation successes of white and black rhino, and comprises the next phase of a long-term rewilding programme aimed at restoring the park’s unique ecosystems to their full functionality and greatest potential biodiversity.

“If numbers are high enough, eland will become one of the signature species moving across the Great Limpopo Transfrontier Conservation Area, of which Zinave forms a vital component. Because they are such great wanderers, sometimes covering hundreds of kilometres in a day, these huge open areas will suit them well. They will choose to stay in areas when they feel safe and there is enough food. The main thing is to get the faunal composition back to what it used to be, and now each animal we bring in plays a different role in restoring the park. The intention is to establish a strong and genetically diverse founder population in Zinave which can then bring far broader ecosystem benefits through their interactions with the environment.

Eland are not only the largest antelope found in Zinave, but on the African continent. They have large appetites and are adapted both to grazing and browsing abundantly, enriching the soil as they feed, and promoting vegetation growth through the natural recycling of plant material. A large, viable eland population will equate to a significant input of nutrients, spread across open plains, grasslands and acacia savanna to shrubland and miombo forested areas.

Miombo trees, part of a vast woodland system, themselves fulfil essential roles; their wooded habitats provide food and cover for a diverse range of wildlife beyond only antelope species, including giraffe, rhino and lion. Covering much of southern Africa historically, miombo is under threat in many regions, so grazing and browsing species such as eland can play an important part in maintaining these complex forested areas.

As herbivores, Eland interact vitally with the landscape’s plant life and in turn, as prey, will assist in supporting Zinave’s growing predator numbers. The park’s capacity to support its ideally balanced diversity and volume of species is constantly monitored and informs careful management decisions.

Eland’s role, and their ratio to other guilds of species, is crucial to ecosystem stability; herbivores rely on plants to survive and thrive, and can be supported by Zinave’s growing ecosystems in significantly greater numbers than carnivores – which in turn depend upon them. This latest translocation event is not the first introduction of antelope to Zinave. Over the years, founding herds of impala, oribi, waterbuck, sable and reedbuck, were moved to the park, with great ecological effect. Re-establishing carnivores was the next logical step, which began with four spotted hyena in 2020 followed by two leopard the following year. Encouragingly, lion and jackal have made their own way into the park as prey – such as antelope – has become more plentiful.

Leopard rarely prey on eland given their size, but lion and hyena will both benefit from this substantial food source, in spite of which eland numbers are expected to grow easily since predator numbers remain relatively low at this stage in the park’s restoration process.

The eland moved to Zinave National Park was part of a total of 95 eland captured for transport this month[August 2022], 26 of which were translocated to Maputo National Park.