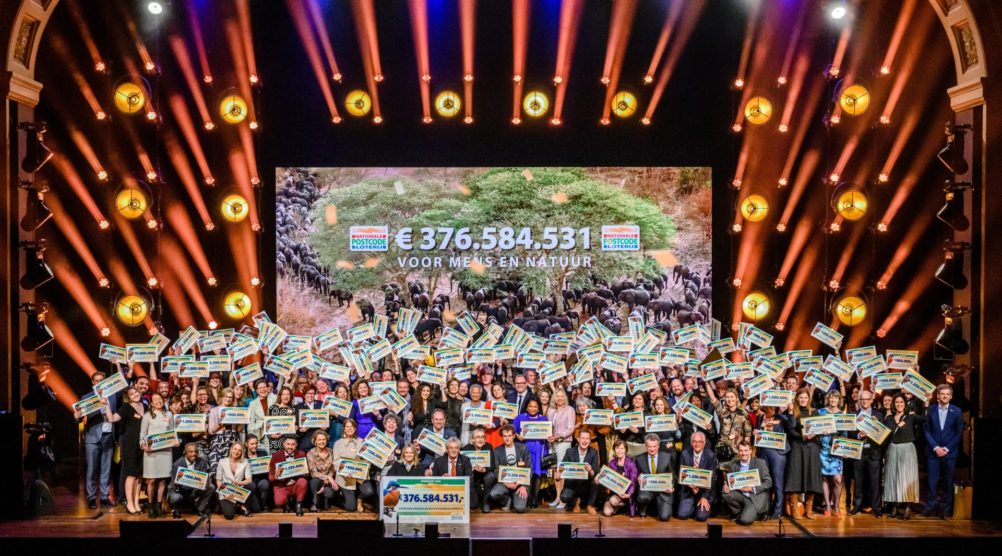 Unwavering support to conservation without borders

The Dutch Postcode Lottery has been a loyal supporter of the work of Peace Parks Foundation since 2002. At the annual Goedgeld Gala held in Amsterdam on 4 March 2020, Peace Parks again received a donation of € 1.35 million to continue working on the protection and sustainable development of transfrontier conservation areas in southern Africa. This year, the Lottery donated more than € 376 million Euros to more than 105 causes that support both people and nature. Since 1989, the lottery has donated a total of more than € 6.2 billion to hundreds of charities and social initiatives. An overview of all donations can be found on  the Postcode Loterij website

To date, Peace Parks has received more than € 42.5 million from the Dutch Postcode Lottery. This includes an amount of € 14.4 million that Peace Parks Foundation and the World Wildlife Fund Netherlands received from the Lottery’s Dream Fund in 2014, to assist with efforts to protect rhinoceros populations in Africa.

Million of support for social entrepreneurship, restoration of Dutch biodiversity and the world’s largest nature reserve

The National Postcode Lottery donated a record amount of more than 376 million euro to charities benefitting both people and nature.

This year’s revenue from the National Postcode Lottery supported a large variety of international charities working towards creating a better world. These organisations focus on, for example restoring biodiversity, combating corruption and inequality in African countries, as well as helping victims of sexual violence worldwide.

During the annual event in Amsterdam, the lottery distributed a whopping 376,584,531 million euro to 123 organisations this year. In total, 105 charity organisations received operational funding, while  another 18 organisations received a special, one-time donation. Among these donations was a million-dollar incentive for social entrepreneurship aimed at restorating biodiversity in The Netherlands.

Dorine Manson, managing director of Postcode Lottery: “We are extremely proud of being able to make these important and impactful donations made possible by our loyal participants. We do it to support more than 100 charity organisations, including Food Banks Netherlands, Oranje Fonds, The Red Cross, AAP Foundation and World Wide Fund for Nature, that are committed to a just and greener world. These organisations will use the funding to reinforce their contributions to creating a better world.”

Winner of the Nobel Peace Prize and developer of microcredit Professor Muhammad Yunus, spoke about the power of social entrepreneurship during the evening: “Although social entrepreneurship can be an ongoing endeavour, when used in the right way, an incredible number of people can benefit from it without having to invest  money time and time again.” At the event, Professor Yunus was surprised with a 2.49 million euro donation for his Yunus & You Foundation. With this contribution, the foundation can combat youth unemployment in Africa through financial support, training and advice to social entrepreneurs, specifically in Uganda and Kenya.

Millions for the fight against human rights violations

The Sentry, a human rights organisation, received 6.3 million euro to combat the corruption and self-enrichment of war criminals worldwide. The organisation protects vulnerable population groups who are victims of war violence, mainly in east and central Africa. THORN received a donation of 1.5 million euro, which they will use to combat the online sexual exploitation of children worldwide using smart technology. KidsRights received a 1.5 million euro donation to protect children’s rights in The Netherlands and beyond.

Boost for the largest protected area in the world

The World Wide Fund for Nature (WNF), African Parks and Peace Parks Foundation received a donation of 16.9 million euro from the Dream Fund of the Postcode Lottery to fund the Unlimited through Africa project. Due to climate change and human actions, the biodiversity and ecosystems within the Kavango Zambezi Transfrontier Conservation Area in southern Africa is in danger. If lost, it could have disastrous consequences for humans and animals. African Parks, Peace Parks Foundation and the World Wide Fund for Nature came up with a rescue plan to prevent this iconic conservation area from disappearing. In close cooperation with local partners, they will protect water catchment areas and reconnect protected areas, creating a rich landscape for vulnerable and endangered species, such as the iconic African elephant. Moreover, this creates ample opportunities for economic development for the residents of the area who often live in poor conditions.

Millions for the restoration of biodiversity