94 Graduates Look Forward To A Career In The Tourism Industry 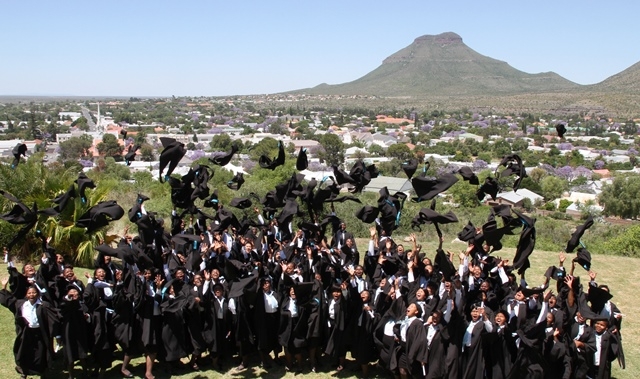 On 22 November 2013, 89 women and five men from southern Africa’s rural communities graduated in hospitality service operations at the SA College for Tourism. The five men were trained at the request of the Chemucane community in Mozambique, where an upmarket lodge is being established with funding from the World Bank and the Ford Foundation. Joining the hospitality service graduates, were 12 young tracker graduates who completed their year-long training at the SA College for Tourism Tracker Academy, where they mastered the age-old indigenous and traditional art of tracking animals in the wild.

Guest speaker of the day was Ms Unathi Msengana, a South African singer, actress and radio personality best known for hosting shows on youth station YFM and as judge on the M-Net Idols competition. She also handed certificates to the graduates, who were capped by Deputy Minister Xasa.

The Top Hospitality Student of the Year, Ms Luciz Hararwa of Malawi, was announced by Mr Andy de la Mare of Absa. Luciz was joined at the podium by her runner-up, Ms Memory Danster of Namibia and by Mrs Barbara Pudel, who invited them to an all-expenses-paid working visit of four months at her guesthouse in Portofino, Italy in 2014.

Mrs Marian van der Merwe handed the Londolozi and Samara game reserves’ top tracker students of the year trophies to two South Africans, Mr Velenkosi Tembe from northern KwaZulu-Natal and Mr Norman Chauke from Makuleke in Limpopo. The trophies were accompanied by cash prizes of R2 000 each, sponsored by Eugen and Sal Roux of KwaZulu-Natal.

Mr Werner Myburgh, CEO of Peace Parks Foundation brought the day’s proceedings to a close by handing the Peacemaker of the Year Award to Ms Julia Nyamate from Jagersfontein in the Free State province of South Africa. The prize is one of a limited number of copies of Sir Harold Riley’s pen sketch of Dr Nelson Mandela that he donated to the college.

Copies of the book, Moments of Truth, written by Mr Jan Carlzon about his years as CEO of Scandinavian Airlines and donated by the author and his wife, Susanne, to each member of the graduating Class of 2013 were collected by the graduates as they left the graduation hall, singing.

Peace Parks Foundation proudly supports the SA College for Tourism. The college was established in 2001 by the late Dr Anton Rupert, then chairman of Peace Parks Foundation. A new memorandum of understanding, which formalises the relationship between the two institutions over a wide range of college management spheres, was signed in 2012.

Africa's Biodiversity Is In Good Hands